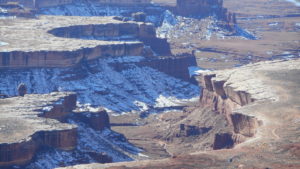 Landscape is an important part of my life. As did one of the main characters in my novel of mainstream-contemporary fiction, The Dirt, I spent most of my life in Chicago. Landscape is of dwindling importance in a flat city. Growing up, we had the lake, and we had our architecture. Subjects like geology were of little interest in a place where the greatest local relief was about 20 feet along Ridge Avenue, the edge of a glacial moraine.

Coming out west to the Four Corners, or to the Grand Canyon, was like opening my eyes for the first time. The Colorado Plateau cracked the shell of a new world for me. And I cracked new kinds of books; books about geology and local history, Native American civilization and mining.

I’d been in love with writing since I’d been a boy, but I didn’t really fall in love with landscape until I came out here, first as a tourist, then as a hiker, and now as one who lives on the plateau. My early stories took place in eastern cities, or maybe in Wisconsin or downstate Illinois. That was as much landscape as I knew. But after I moved out to a small town just north of Mesa Verde, the scenes shifted to small, high desert towns, the chapters changed to canyons and mountaintops. The Dirt is really a story told by the land.

The Dirt: The Journey of a Mystic Cowboy, follows the story of Yale Forestall, an eccentric loner who, like the Colorado Plateau on which he was born, defies categorization. He’s as much the landscape as he is human. He dissolves into it, disappears onto a high plateau for days. And no one, not the one who’s supposed to save him from him himself, his counselor, Miles Holland, not one of them can track him there. Because Yale, in a way, melts into the land, becomes the land. The Dirt is about disappearing from yourself; not hiding or eluding, but allowing your self to slip away. Nirvana isn’t annihilating yourself. It’s forgetting that you’re even there.

Born in the remoteness of southeast Utah, no one ever figures out from where he came. Yale and his would-be savior, former lawyer Miles Holland, inhabit the far eastern edge of the Colorado Plateau, a red region of mesas and buttes, of fins and spires, dry as it is desolate. Above all, this 120,000 square mile wilderness is a land of deeply incised defiles, carved by slight, silver rivers which run in such diminution to the vast gorges they’ve chiseled that it makes no sense. Not to a mind anyway. But to the soul which made it, this crazy jigsaw of rock and sand transcends sense.

I’ve written quite a lot about this region. My earlier novels, The Crippy and The Mind Altar, take place here. A collection of short stories set in the Grand Canyon, Canyon Calls, uses the land as a character. Looking back, I suppose that’s a reason why I wrote The Dirt; to celebrate once again this vacant land.

Like the landscape, Yale remains austere, clean of the egotism of civilization. There remains in his wizened grin, in these deserts and mountains, an ineffability difficult to track down in more cluttered landscapes. The sparseness here, the unvegetated bones of the land, in unmoving scarps and in treeless mountains, its ruddy benches and peopleless platforms, strips everything else away. If you come out here alone, like Yale does, it slows you down to a deliberateness that helps you realize that in cities, all you chase your whole life is nothing. Because there is nothing to chase, nothing out here, nothing that stands back of it all. If you arrive without expectation, if all you strap on your back is some soon-to-be hot-as-piss water, you’ll soon know that most of what you think you need is just what you want. All that abides with you are the light and the wind. The light is all that fills the emptiness, scorching in the midday, the most plentiful resource here. Soon, you see, as it gilds all things, that it emanates from all things. It is that by which you see the road.

The Dirt celebrates solitude, for the other natural resource in abundance here is aloneness. In want of escape from the cities, a soul seeks its refuge here. That’s why Yale remains. That one reason above all. It’s why his lost savior, Miles, came. It’s why I came, too. That’s what The Dirt is about.