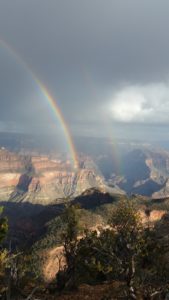 What’s at the End of Your Rainbow?

In the 12-stage journey of the hero popularized by mythologists such as Joseph Campbell, writers such as Chris Vogler, and the psychiatrist, Carl Jung, the hero undergoes many hardships on her way to psychological transformation.

Like Sarah Connor in the Terminator series, she may begin life quite commonly enough in her ordinary world. Sometimes, the hero willingly accepts the call to adventure and crosses the threshold from her ordinary world into the special world. Just as often, he refuses the call, and must be dragged into his adventure kicking and screaming, like Rick in Casablanca. Yet after meeting with his mentor (Gandalf to Frodo in Lord of the Rings), the hero is often given special knowledge or power, perhaps a talisman to help him along the way. For Frodo, it was the ring of power itself. The story doesn’t really begin until the hero enters her special world, encountering allies to help them make it through their tests, which are often made more difficult by enemies.  Frodo needed a host of allies because he confronted a host of enemies as well.

In the last post, we described the hero’s approach to the inmost cave, which represents her greatest fear.  In the cave, which can be figurative (the police station for Sarah Connor in The Terminator) or literal (the many mountain caverns encountered in Lord of the Rings), the hero must withstand a supreme ordeal, in which her greatest fear is encountered. That fear is often the fear of death. For Sarah Connor, she finally finds out the horrible truth: the terminator is real and he’s after her. Even the police can’t protect her.

In an action-adventure story, the confrontation with death is often quite literal, as for our unfortunate Sarah as bullets rain down all around her. All her protectors, save one, die violently. In a romance or drama, the death is usually a symbolic one. For Rick in Casablanca, his supreme ordeal involves facing his long-lost love, who’s now married to someone else. What he must confront is the death of his love affair.

Yet once the hero faces his greatest fear, a transformation takes place. In most stories, the hero is somehow incomplete, flawed at the beginning of the story. He suffers from an unfulfilled hunger, even if he doesn’t know it. Rick needs to forgive his lover. That’s the inside story in Casablanca. Once he does that, he accepts his mission and helps her and her husband escape the Nazis, which is the outside story. The hero gains something by confronting her greatest fear. Sarah gains Kyle Reese, her protector, who ends up her lover, however briefly. Yet just as important, she finds within herself a previously undiscovered courage and mettle. So, by confronting fear and undergoing symbolic death or a near confrontation with the real thing, the hero seizes the sword. She receives a reward which enables her to fight on.

Now, the hero is already on the road back from the special world. Yet the final battle still lies ahead. For Sarah, she must undergo a resurrection, a final purification. Her battle takes place in a roboticized factory. Her lover and protector, Kyle, sacrifices himself and she must fully uncover the warrior within herself, fighting the terminator to the death alone. The hero must undergo one final confrontation with her greatest fear, with a symbolic or literal death. The supreme ordeal may have begun the hero’s metamorphosis, yet the hero’s transformation isn’t complete until she finally defeats her nemesis, who often rise from the dead unexpectedly, in the final battle.

On a deeper level, the hero is defeating fear within himself. In some stories, the hero must undergo psychological union with his adversary. This unity of opposites between the archetypal anima and animus takes place in many romances. In Casablanca, Rick must come to peace with his lost love, Ilsa. He must relinquish his bitterness for her abandonment of him. Instead of seeking revenge against his former lover, he must reconcile with her. And so, the enemy is really the hatred he carries within himself. As the Chinese say: he (or she) who conquers himself is greater than he who conquers a city.

This brings us to the final, and 12th stage, of the journey: the hero’s return to his ordinary world. Known as return with elixir, this stage is the Holy Grail of King Arthur, the final destruction of the ring in the fires of Mount Doom. Often, it involves the capture of some special and vital gift needed for the hero’s people. Yet in more personal stories, it may involve the hero’s return to ordinary life with some special insight or needed wisdom for herself. In some stories, it’s both.

Sarah Connor discovers the warrior within herself. On a very physical level, she’s gained something else: she’s pregnant with the future savior of humanity. For Rick in Casablanca, he’s let go of his need for vengeance against Ilsa and his bitterness. He realizes a selflessness beyond his pettiness and personal desires. Yet in providing the letters of transit to Ilsa and her freedom fighter husband, he’s also aiding the resistance and helping defeat the Nazis.

On a psychological level, this reentry back into the ordinary world can be very difficult for the hero. In our real world, think about astronauts who’ve landed on the moon, only to return to ordinary earth. Or consider the often-difficult fate of famous child actors who’ve reached their apogee rather early in life. What’s left for them after child stardom? Or maybe it’s just the way you feel when you’ve come back from a vacation, only to have to go back to work Monday morning. For each of us it’s different.

Yet your trip changed you. You’re not the same person you were when your journey began. That’s the essence of the hero’s journey.