It’s usually hot by this time of year. Only got 10 days left before June. Monday is Memorial Day. I feel for the hummingbirds. They migrated up this way a couple weeks ago, and I’ve had to knock the snow off their feeders and stick an ice pick through the nectar holes just to unplug the ice. The fallen snow piles up inches on the feeders each night.

The fallen snow. Yale had a different meaning for the term. He used it to refer to a man’s partner; his intimate partner. His girlfriend. Yale suffered from a language disorder. He understood what a person said to him, and he tried to use the commonly understood meanings in reply, but the words came out differently for him. As he said, his Translator was broken. So, when Yale said ‘fallen snow,’ he really meant ‘girlfriend.’ He meant my girlfriend, Udenni. 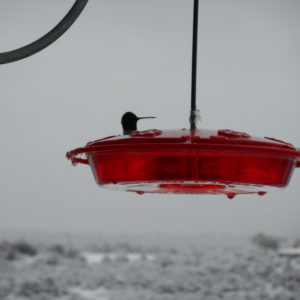 Trying to hang on

Where did that leave us? It doomed us from the start. Like the hummingbird above, our courtship was sentenced to a cold, slow death in a wintry world. I hate to be so cold about something so cold, but I need to tell the truth.

I was defending Yale in his guardianship trial, acting as both his attorney and as his expert witness. Don’t ask me how I got into that game of Twister. A disillusioned lawyer running from a case that blow up on me in Chicago, I ended up out here, fighting pitched battles against a judge, a State psychiatrist and an ex-District Attorney who were ganging up on me to protect their precious reputations. They wanted to ensure that Yale would spend the rest of his life in some nursing home. And if you knew Yale, that was worse than death.

‘You need some exorcise,’ Yale said when he walked into my office one day with that guardianship petition in his hand. He meant my demons. They needed exorcising. Udenni had demons of her own. It’s never a good idea when two people with unexorcised demons decide to hook up. While the two people are trying to have a relationship, their demons are having a wrestling match. So instead of two people in bed, you end up with four. It complocates things.

Udenni was trying to tell me about my demon; that I’d lost all objectivity in Yale’s case; that I was seeing in him a mystic when really he was probably just putting me on; that I was putting myself on really. For in the end, no one tricks us. We only fool ourselves. But I couldn’t see it. There’s nothing more dangerous than a man on a mission who doesn’t know he’s on one. So Udenni and I became more and more strained. She tried to warn me. I wouldn’t listen. The better I didn’t listen, the shriller she became in her warnings about how that judge and that ex-D.A. and that State psychiatrist would hang me out in the town square, shred my reputation, ruin my career. But I just couldn’t hear her. So we blew up.

Yale, a keen observer, saw it coming. This is what he thought-

In the springtime it snows a different snow. Crab tree in full bloom out my door. Hundreds of white petals snow by my window. She’s losing her bloom. Thousands of blossoms soften the ground, dancing on my rooftop, giggling in the cheatgrass, decorating the borders between the scrub oak and sand. She still wears herself in flowers, but shares herself now with the wind, the world.

← Stripping Us from the Land
Lost to Ourselves →