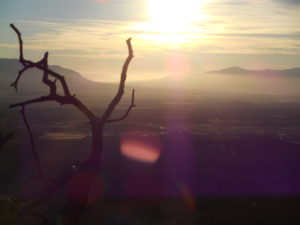 A sunset from Claycomb’s ranch

Rolando Claycomb was one of the last big ranchers left in the county, which was surrendering to development. My client, Yale, lived in a tiny, battered old Airstream up on blocks on Mr. Claycomb’s section of land. Yale served as a hand to help Mr. Claycomb run the place. Claycomb was a  decorated war vet who’d lost his wife years ago. And he was an alcoholic.

Rolando Claycomb represented the West’s past, and therefore its passing. Gone were most of the old, unsplit parcels. This land was hard and dry and when the snowstorms blew over from the La Plata Mountains to the east, the winters could be just as cruel as the drought-struck summers. People got tired of running cattle from summer pasture up in the high country down to browned-out winter pasture. They tired of fighting over water. And Mr. Claycomb, he exhausted himself fighting the waves of ‘progress’ which swarmed in from the coasts and big cities, standing against the tide of the great interior migration filling in the intermountain West. He grieved. He drank.

I was a big city refugee who rode out here on one of those tidal waves. Mr. Claycomb was important on my landscape. He stood for more than just the passing of the West. Without his section of land, how would my client, Yale, support himself? The State was seeking to declare itself guardian over Yale. Yale had a below average IQ. He depended on the sustenance Mr. Claycomb’s land provided. He grew corn and beans and squash in the red soil of Claycomb’s tract. He cut and sold cords of wood from Claycomb’s P-J forests. He helped keep Claycomb’s spread free of hound’s tongue and thistle, and he kept feeders for the horses full in December, broke up the skim of ice that formed on the troughs in January.

Claycomb and Yale depended on each other, kept each other going in different ways. Without Yale and a few other hands that Claycomb kept on part-time, Claycomb would’ve long ago had to sell out to those developers he detested so much. More important from my point of view, Yale would have had nowhere to go, no food to eat without Mr. Claycomb. He even drove Claycomb’s truck (unlicensed) when he had to go to town to fetch supplies. They needed each other.

Neither man had any friends or a partner to shinny up next to in bed on those cold, late May mornings when sometimes fell the snow. Each kept the world at a distance for reasons of his own. Claycomb had five grown children, but none of them held any interest in the old man, much less working the land. They’d moved far away to one of the cities. They’d only circle and land after he died, to divide up the bones.

Yale held humanity in abeyance for a different set of reasons. It wasn’t misanthropy like it was in Claycomb’s case. No, for Yale, it was because of the way he’d come up: abused by his birth parents, relegated to the realms of Foster Fear until he aged out of the system. He was such an odd one, Yale was. Odd atop all those diagnoses the psychologists and shrinks had leveled him with since he’d been a boy incapable of using words in the common way the rest of humanity did. His main diagnosis was eccentricity, because of the language disorder that made him talk ‘funny.’ He’d use one word when he meant something completely different. He couldn’t help it. It was the way his brain worked. His neurology was wired differently than the rest of ours.

His dazzling azure eyes gazed into the distance most of the time. Yet it wasn’t the same kind of distance you could see in Mr. Claycomb’s jaundiced eyes. It wasn’t the distance accrued by age or the emptying lassitude of grief. Yale’s eyes kept the world at a distance, seeing over the horizon. They held the distance. They held it within them. You could look into his eyes and see that the reach was something internal. That’s what I saw in Yale’s brilliant sky eyes. They were the windows to what Yale might call internity.

Yet without the ground of Rolando Claycomb’s ranch, all of Yale’s supernal wisdom counted for nothing in this world. The experts concluded that he lacked ‘functional capacity.’ That’s what the State psychiatrist, Dr. Showalter’s Neuropsychiatric Assessment concluded. And all those diagnoses and deficits aimed and flung like knives against Yale since his boyhood reduced him down to ‘gravely disabled.’ That was the statutory language. It all meant that, once Claycomb had slipped over the teetering edge of this world, Yale would end up in a nursing home.

I’d do anything to prevent that, even if it meant my own ruin. And Yale’s.