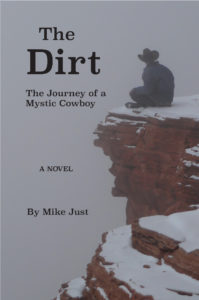 The Dirt, a novel which combines themes mystical and psychological with the backdrop of the American Southwest, is now available in paperback ($12.99) and e-book formats ($2.99). It pits Yale Forestall, a cowhand with a traumatic past who suffers from a rare language disorder, against the State, which seeks to limit his freedom through guardianship. Yale seeks the help of Miles Holland, a small-town mental health counselor self-exiled from Chicago. Miles’s legal career blew up when he was assigned a too-hot-to-handle murder case. Now, he acts as Yale’s expert witness and lawyer in the guardianship case.

Yale and Miles are pitted against the triumvirate of a biased judge, an arrogant State psychiatrist, and a DA determined to win at all costs. To prevail, Miles must be completely objective, but his own judgment as an advocate is swayed by his belief that buried beneath his client’s many diagnoses lies hidden the wisdom of a mystic. Is Miles the only one who sees Yale’s gifts? Or does his own sense of emptiness lead him on an obsessive quest for the truth which ends up in a tragedy no one could see coming?

This novel asks whether eccentricity is enough to take away a man’s freedom, and plumbs the thin divide between genius and psychosis, between uncommon wisdom and those who simply choose to live atypical lives.

← The Big Empty
My Private Shaman →