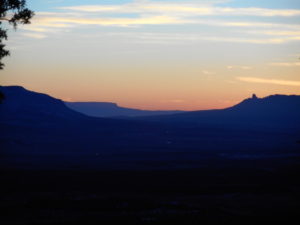 I come up here for the color. Mostly for the sunsets. In the picture above, you’re in Colorado, looking through a false saddle into Arizona, into Navajoland. On the left, barely made out in the darkest blue, are the cliffs of Mesa Verde. To the right, the little toe sticking out is the far southern edge of Sleeping Ute, a disinterred subterranean volcano. More properly, a magma chamber that never broke through to the surface of the earth. The view is southwest, into the Four Corners. The ledge-like feature left of center is an escarpment of the Carrizo Mountains.

Yale Forestall would come to places like this to watch the sun set, to be alone. Sometimes for days at a time, he’d just sit here at the top of a hogback just like this. He’d stay completely still all night, waiting for the sun to rise over the La Plata Mountains just over his shoulder. I could never figure out how he got up on this ridge to begin with. He wouldn’t drive. And it was miles from the ranch trailer he called home.

He had this thing with words, this uncommon usage. You really had to know him, hang out with him awhile to get at what he was trying to say. And even then sometimes, you could only guess at his meaning. Yale was probably the uncommonest man I ever knew. He kept his own counsel. It was as if he flew into this world through the window of his birth, jetted across it in the black night, then streamed out the far window on the west edge of night, just before dawn, and he was gone before people even knew he’d came.

Few knew him. He didn’t matter in the conventional sense. He didn’t know how to use a computer. Couldn’t do basic math. Her would’ve tested in the borderline range in things like IQ. Yet that didn’t mean he wasn’t wise, didn’t mean that he couldn’t see far past what most men saw. Because he wasn’t chasing anything. He didn’t have an agenda or a bone to pick with anybody.  He was guileless, and yet he was beguiled by something. Or he beguiled me. Maybe that was it.

His coming and his going and his passing in between the brief span between his birth date and his death date was unremarkable in the way a mystic’s sometimes is while they live on this earth, only to be discovered after their passing as rare and wise. The world never gives folks like them any nevermind while they’re here. They’re not rich, not particular standouts in any way, except in the way they frame things. They see the world, see you and I, without frames. we end up drawn to them because they don’t frame us the way we draw limits around ourselves. Their particular talent is non-judgment. And that openness allows them to paint everything in a just-born way.

Yale had this other sly gift. You could blink and he’d be across the room. It only happened to me once. The first time he walked into my office, wanting me to defend him in the guardianship case the State of Colorado had instigated against him. Was as if he were a shapeshifter, able to assume a pose in any place in an instant. He moved in an instant across my office. It was as if he could assume a pose in any place in a moment. But he didn’t do it to show off, to show me. He never tried to impress people like that. He did it because he wanted to get away from my photocopier. He was afraid it would steal his essence. So he moved like that. Like a shaman.

I suppose that’s what he was to me: a cowboy shaman, trying to dance with the rest of us while he whispered a message in our ears, one at a time on the dance floor. If only we would have listened.

This post regards a work of fiction. Names, characters, places and incident are products of the author’s imagination or are used fictitiously. Any resemblance to actual persons or events is purely coincidental.