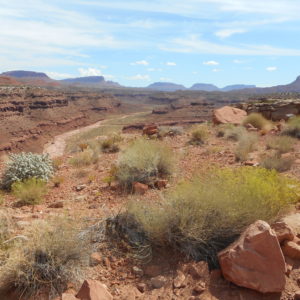 Like Yale Forestall, the hero in The Dirt, a novel of mainstream-contemporary fiction, I live on the edge of the Colorado Plateau, which means I’m on the verge of red rock country. While I love the mountains which I’m also perched on the flanks of, a slight favorite is southeast Utah. Once west of Blanding, I drive into an Empty quarter of Wingate sandstone cliffs stained like a good wine (Hah! Like I’d know).

Several side canyons feed into Lake Powell. Some are slots. Some are not. There are White and Rock, Farley and Blue Notch. I’d been to Clay Hills and Red Cliffs. On a gazetteer of Utah, a canyon called Red struck my eye as a rather large affair. The map ain’t the territory, yet after some years of exploring this remote region called Cedar Mesa and pouring over the maps that represent it in two-dimensions, I have an idea of where I’d like to explore.

There wasn’t much about it online. When I googled Red Canyon, Utah, another canyon, farther west near Pangquitch, boasted that it was a Bryce Canyon in miniature. Well, I’d already been to Cedar Breaks last year and seen the Claron Formation up close, and almost fallen off a cliff taking pictures. I’d rather see the other Red Canyon.

I found campsite high on a ridge, near Radium King Road. Perhaps names like that scare off the general public. Me? I like radiation. It’s why I have a big screen TV. Anyway, this time of year, with temps in the high 80’s to low 90’s, I had Red Canyon, which started beyond a homemade, bared wire gate festooned with the lids of chewing tobacco tins so nobody would run into it, all to myself.

That night, I hiked down Red Canyon Road until I lost light, passing by towering red cliffs on my left, banded with badlands at their bases. In the middle of the road, a decapitated rabbit’s head gazed up toward the night sky with its ears paired back. A half-moon allowed in liberal light by which to find my way. At the mouth of the canyon, maybe 15 miles northwest, the familiar camelbacks of the Henry Mountains loomed high above sheer cliffs, marking the old Glen Canyon now drowned in Lake Powell.

The next morning, I set out, with my Platypus full, at about 7:30. Red Canyon quickly plunges into a deep chasm, stepping out on either rim in stairstep rises several miles wide at the top. Several canyons radiate out from Glen Canyon-Lake Powell like this, each one focusing like a gunsite on the Little Rockies at the southeast end of the Henry’s, which dip their hot, sharp shoulders into Powell.

I followed the road, which dropped in places sheer into the canyon, for several miles, then took a detour past a rusted gate on a cliff, following an abandoned road along a cliff ledge for a mile or so. In the distance, what I’d thought were pickups and RV’s that come down with boats to the shores of the lake, were old, rusted out trucks and piles of culvert piping. I’d stumbled on a onto the ruins of 20th century mines. You’ll see some pictures below. 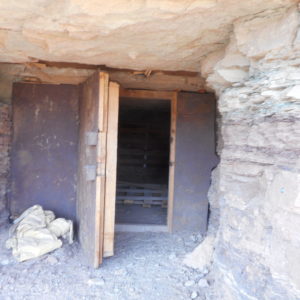 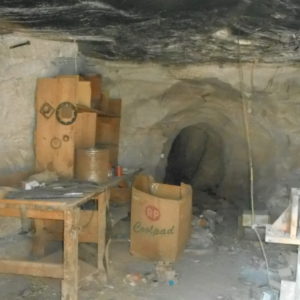 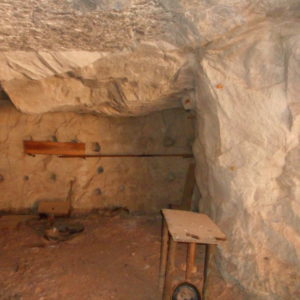 I’ve woken up in worse places

I climbed down the cliff, where the long wash that marked the canyon bottom converged with the road, a sign indicated that mine closings and abatement work would soon begin.

I’ve only run out of water once before in the desert, maybe five years before in nearby Blue Notch Canyon, where I’d spotted the deceptively nearby waters of Lake Powell from the Notch, and stubbornly determined to make it all the way down to the shore, only to learn the hard way that it was 22 miles round trip. This time, I ran out earlier in the season. Stubbornness wasn’t my enemy: unawareness was. I simply assumed I’d have enough to hike for 6 hours, and I ran out at about the 4 1/2 hour mark.

My feet pained me. Pain is only a memory, my intuition said.

But a memory of what?

I remembered something from a survival book: don’t panic. So I focused. Breathed through my nose, took some Propel electrolyte powder meant to be mixed with water. I kept wanting to stop but knew I’d never get where I was going as long as I wasn’t moving. Kept thinking about my ‘goals,’ which had transformed from doing God’s will into specifying a tall, slim, long-haired brunette with a nice-,. Well, you get where my head was taking me. Electrolyte imbalance ‘n all. But the point was that I’d never move closer to anything I wanted in life as long as I stood still.

As I trudged down Red Canyon Road toward my truck, I did allow myself short breaks. I even took pictures, such as the one immediately below: 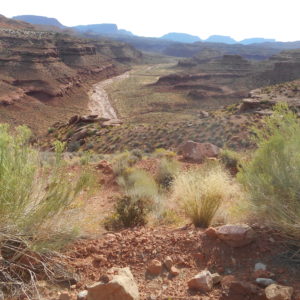 I kept moving, knew I’d make it out alright. I had gallons of water in the truck.

I remembered who and what it was that guided me, and realized I couldn’t fail. Since we are all children of Love, we must be love. Since love is endless, we too must be limitless.I’d come all the way out here to remember this one fact.

Long before I thought I would, I saw my truck, parked along the cliff road.