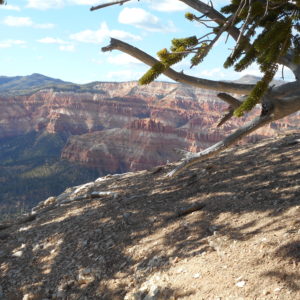 What’s Gooseberry Mesa like? Upon first impression, it stands out as a sea of P-J lined by red rock, like so much of the Colorado Plateau farther east. Except I’m in southwest Utah. As a wanderer familiar with the red rock country of the Plateau region, I wouldn’t be blamed for confusing these lands with those of the Colorado Plateau. Actually, I’m in somewhat of a transitional zone between the Plateau and the Basin and Range province to the west. Yes there is the ubiquitous pinyon-juniper woodland to confuse me. The red rock reminds me of the Plateau, but the morphology changes not so subtly here. The geological processes which shape the Colorado Plateau include the relatively recent uplift of a corkscrewing micro-continent and the down-cutting of rivers into the soft sedimentary forms. Just west of here in the Great Basin, extensional faulting has stretched the land thin, resulting in the rolling over of massive faultblock mountains in a North-South orientation. In fact, there are more mountain ranges in Nevada (300) than in any other state.

As I familiarize myself with the surrounding terrain, I become aware of housing tracts, my favorite surprise discovery when I’m exploring wilderness. On this trip through the southern tier of Utah on my way to a wedding in Vegas (don’t judge), estate homes abound everywhere like the arriving gnats. From Cannonville just outside Escalanate NM to Brian Head at the edge of Cedar Breaks, I encounter invading development. Cedar Breaks seemed the edge of forever. I’d camped there and scared up a mountain lion, I think (or probably a bobcat) in the dark. Cedar Breaks seemed the depopulated alternative to Bryce Canyon.

The morning after I struck camp, I drove the gravelly road up Brian’s Head, the high point of the region, only to find that I’d been surrounded by ski town development the whole time, at the very base of the Great Basin. More like Great Basing for a ski condo.

A newspaper I perused at a gas station in Brian Head wondered if there was too much development outside the national monuments. Ya think?

A day later, I arrive at Snow Canyon, a state park engulfed in lava fields and riddled with lava tubes. I think I’m walking on earth in its primeval era, the heaving land black and sharp and  lifeless. Until I drive out the west entrance of the park and discover housing tracts a stone’s throw from the primordial early earth. I’m in St. George, one of the fastest growing cities in America.

Much of the fight over public lands has to do with economic development. There was some movement Utah to enact a reverse eminent domain law which would seize land from the federal government in a public taking aimed at allowing development. I’ve spoken with people mad as hell at the Bears Ears National Monument declared by Barak Obama, and at residents in the tiny town of Escalante still fuming over Bill Clinton’s declaration of that NM as well. Maybe if I grew up there, I’d have a different perspective. But I come from Chicago, and there’s no National anything anywhere near it. Who likes a meddlesome outsider?

Much of the anti-monument movement i about allowing cattle grazing and mining. Those, frankly, leave less of a blotch on the land than housing tracts. A least a portion of the environmental movement is against industrial and mining interests. While not ideal, these can often be reversed. Houses seldom are. Once people move in, they bring highways and malls and pretty soon we have SoCal, an Inland Empire, a Phoenix or a Vegas.

If you’re a Utah resident, here’s what I’d like you to do? Fast forward a hundred years. In 100 years, would you be prouder of the fact we developed the canyons and deserts and mountains of southern Utah? Or that we set the land aside? That we created more jobs for a period of time? Or preserved the beauty and silence of what is to me the most remarkable state in the Union?

We should develop the Grand Canyon and Yellowstone. We should’ve done a hundred years ago. What were we thinking back then? Think of all the jobs those houses would’ve created back then for house framers and electricians and plumbers. 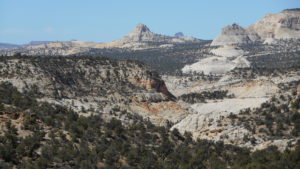 And if you think there’s too much federal land, too much set aside, sure, you’re right. We should sell it to get our nation out of debt, right? Sell it to business interests, to other nations. There’s just too much land in federal hands. We didn’t set aside much of any land of it in the east. We trusted the developers and look how the East Coast turned out? Use the East, which we wrecked, as an example of what we should do in the American West. 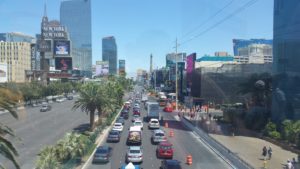 This is what we want Utah to look like

Out here, in the middle of nowhere, everywhere, everything is for sale. It wasn’t like that even a few years ago, before people decided to quit the cities by their thousands and started moving to UT, CO, AZ, WA and OR. To escape our problems, we bring ourselves to new places, and reproduce them somewhere else. Like a denning creature escaping the flees in its nest by moving to a new den, we bring our problem along with us.

I am traffic. I am development.