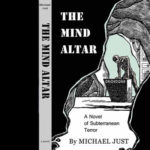 Got the notion for The Mind Altar a long time ago. When I was a boy, I had male friends, like most boys. But I also had a girl friend. She was a friend, and I felt we had this special link, almost as if she was my sister.

And then she became sick, with cancer. I remember visiting her in her basement apartment. A hospital bed had been set up in the living room. My mom came with, and when I saw her lying in that bed, my friend seemed so small and white, angelic. Smells I hadn’t smelled before. Hospital smells, medicine smells, sickroom smells. Our teacher had us all make cards for her. And then she died.

I dreamed about her after that. Dead people often visit my dreams, as I’m sure they do yours, too. And when they come, I think they really visit us from an Underworld of two dimensions, of whispers and shadows. Their world is a colorless one, like our dreams. You end up trapped there, creased into its overflowing book of souls like a folio.

To me, 1st grade was this tryout for life, an instant Olympics of popularity I was never ready for, and Bill was the one I emulated. I would’ve sold my soul for popularity, for acceptance, to be him. Everything I did, I did to be like him.

He hung himself years later, while we were both still young. And I got this idea after he died that I invited him to take up residence with me. His psyche needed a home, and if he wanted, he could come live inside me.

Over the years, our psyches entwined so that we could no longer be separated without the death of both of us. A psychic later confirmed my suspicions. We were the Mantle twins in Dead Ringers, conjoined at the mast of the soul.

And so, I came up with the character of Eurydice Wiles, a young woman with a backstory I’ve just described. Along with six other misfits, she contracts, for hard-to-turn-down hazard pay, to go underground and solve a mystery: what made everyone turn on one another in the most dangerous prison in America? One that housed psychopaths. Called Bright Angel, it’s carved deep under a mountain in the middle of the American desert. Down there, prisoners took over the asylum. Staff turned on staff. I’ve always believed that psych wards and prisons are different aspects of the same hell, since most prisoners are mentally ill.

I’ve worked professionally with psychopaths, as an attorney and as a psychotherapist.  I believe that severe mental illness is often the modern expression of what was once called demonic possession. Just new paradigms for old metaphors. A friend who knew a psychiatrist who worked in a mental hospital once had this shrink tell him that every psych ward has its own exorcist. No shit.

In The Mind Altar, we have a journey underground. Something’s gone horribly wrong. This Hadean world hides macabre, unspeakable acts from humanity. And the people sent down to check it out have their own demons. The Bright Angel Facility seems to have a mind of its own. It starts to work on the seven members of the expedition. One by one, it changes them, slowly.

Well, I never answered the question posed in the title of this post: What is a mind altar anyway? That’s the mystery Eurydice Wiles and her expedition must solve.

Mike’s other titles, including The Crippy, The Dirt and Canyon Calls, are available through this website or through Amazon at https://www.amazon.com/-/e/B002

← What Is a Crippy?
Narrow Canyon is Why I Write →