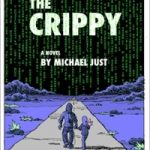 I’d heard the term used before, but when my editor started editing, she called and said she couldn’t find a reference to crippy online. I kinda shrugged and said: “Let’s use it anyway.” I liked the word. FYI, a crippy is a cryptographer, someone who makes or breaks code.

I got the idea to write about a kid who can decipher any language, any script, any code. I also wanted to illustrate how meth was destroying rural America, small towns out west. I was familiar with the drug and the lifestyle. I knew small towns out west, because I live near one.

I live in a triple junction of sorts, where Native, Anglo and Latino culture come together. I wanted to highlight that, so I made my main character someone with half-Navajo, half-Anglo ancestry. He’s adrift in both worlds, feeling at home in neither. He turns to hard drugs, deals them, relinquishes custody of his kids while he’s doing hard time, then lives the life of proverbial regret.

Enter Sam, a young girl who’s sometime prostitute mother pawns her off on Mitch. Sam has a gift, and due to this gift, everyone from spooks to criminals is trying to kidnap her.

The Crippy is a character-driven quest which incorporates elements of science fiction, mystery and suspense. My job is to keep you reading. There’s a lot of pain in this work. Hopefully, the payoff is that you’ll be entertained, and surprised.

You can buy The Crippy in softcover or e-reader formats on amazon at Amazon.com: The Crippy eBook : Just, Michael: Kindle Store

Mike’s other titles, including The Mind Altar, The Dirt and Canyon Calls, are available through this website or through Amazon at https://www.amazon.com/-/e/B002

← If You Can Do Anything Else Besides Write, By All Means, Do
Just WTF is a Mind Altar, Anyway? →