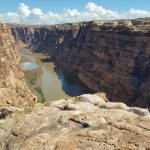 People ask me why I write. Well, I ask myself why I write. People don’t really care. In a way, to write is to travel. I used to live in Chicago, and even after I moved out to the Four Corners and was stuck in some crummy office when I really wanted to be outside, I could always retrace the steps I took through a slot, or the miles I drove up through the Big Empty of Southeast Utah. When I wrote about these places, I went there in my mind.

My writing is always part travelogue. I’ve hundreds of blogposts on out-of-the-way nature and my mishappenings in it. Many of these are on this blog under Nature Nonfiction Archives – Just Mike Just. But my focus has always been on fiction, short and long. Infused into the stories are the places I’ve spent my life travelling to and through. And so, many of my novels are stories of the road. People tossed into unfamiliar, scabbed lands, accosted by highwaymen and the occasional Samaritan (sometimes good, sometimes gray). Characters on the run, in exile, looking for home.

Most of the backdrops, like the one at the top of this post, are alien and desolate. The landscape is almost always its own character. I want readers to be enthralled by an enchanted western landscape, as I am. The deserts of the Southwest, the Colorado Plateau, the Great Basin, and the mountains surrounding them are always part of the tour.

The picture at the top of this post is just north of Highway 95 near Hite Crossing, at the northern reaches of Glen Canyon (formerly, Lake Powell). Many trekkers won’t have anything to do with Powell because it ruined Glen Canyon and is an environmental nightmare. Both true. But really, what are we gonna do with it? Ignore it? Abandon it?

The canyon country surrounding the second largest reservoir in America is some of the most remote left in the Lower 48. At Narrow Canyon, at the north end of Glen Canyon/Lake Powell, a long, straight gorge plummets from slickrock domes of Navajo sandstone. at the rim. A slot canyon sunders its way to a precipice and then spills over dry falls through a chokestone gullet a thousand feet down into the Colorado. Willow-forested beaches line the bases of scarps so vertical there’s no talus at the bottoms.

And away from the canyon, giant panels of Wingate Sandstone have decayed to fins hundreds of feet high, abandoning buttes and towers. Vast feeder canyons flow into Powell: White, Fry, Blue Notch, and, farther off, Dark Canyon. You can’t abdicate an austere, clean, unpeopled desert scape because Floyd Dominy and the Bureau of Reclamation outsmarted David Broward and flooded a defile here instead of up at Dinosaur National Monument on the CO-UT border. No, instead, you must write about it, capture what’s left of it in pics and words.

I try to chronicle its geology and its emptiness before the tourists and the developers come here, too. I’m told that when Lake Powell was at full pool (or is that fool pull?), the waters inundated Narrow Canyon. 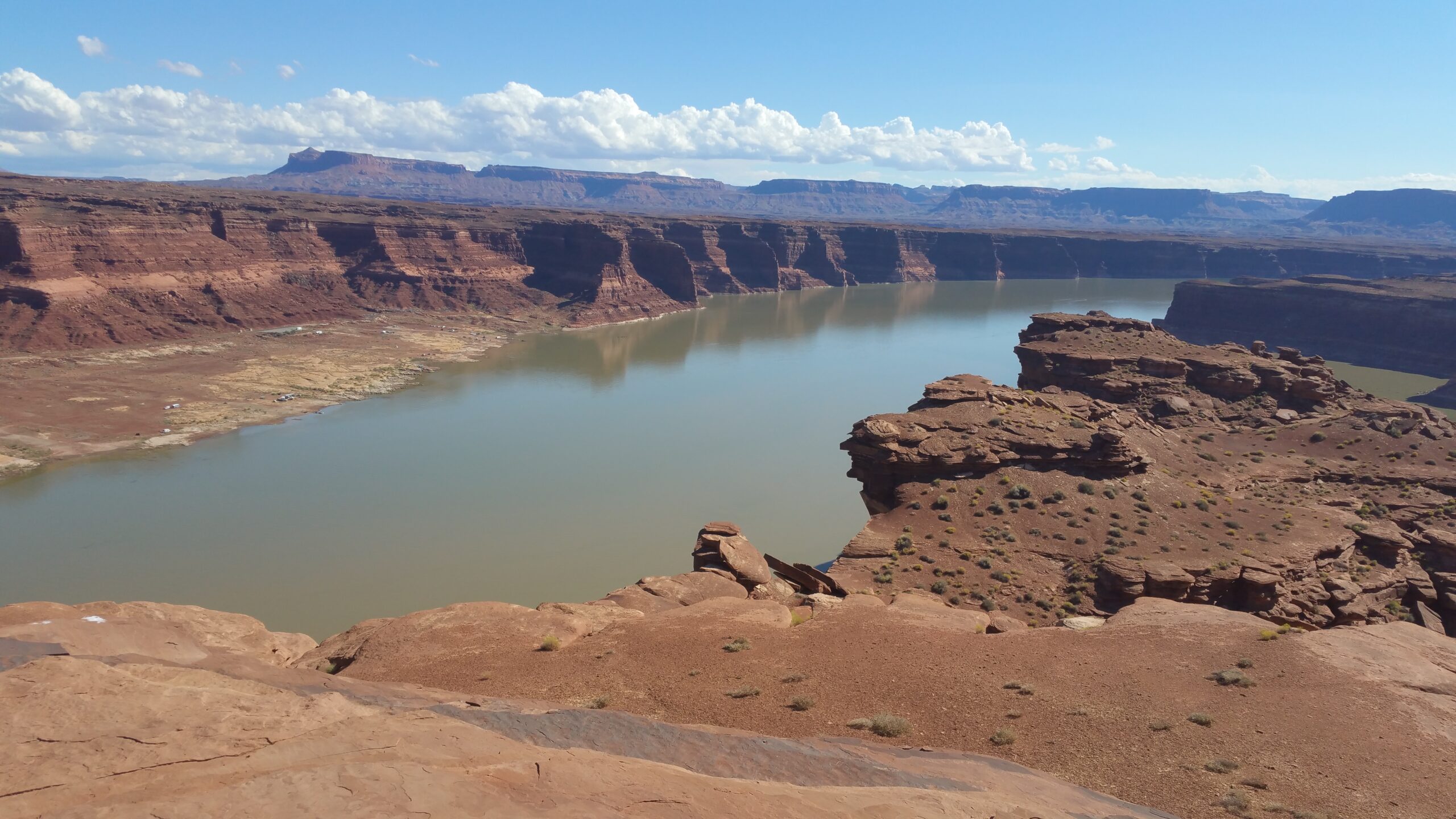 Yet since the 1,000-year drought took its toll, the main channel of the Colorado, up in Narrow Canyon all the way down past where the eye can see from the Hite Bridge, has reverted back to its ancestral banks, or to something near what they were when Glen Canyon was still Glen.

So Narrow Canyon is a canyon again. The beginning of Lake Powell is no longer a lake. It’s changing back to what it was. The last few times I came out here, you could notice the bathtub filling up again. So, if you want to see Narrow Canyon before it’s a turquoise lake sloshing up against the red cliffs, see it soon.

This is why I write about it. I want this territory to be memorialized. I want it to be loved by characters who travel through it, are victimized by its sand and wind and desolation. If you choose to read one of my novels, you learn about all that. Hopefully, you’ll travel along with the characters as they contemplate supernal sunsets and weather improbable storms on rocks shaped so weird no sculptor could make them up.

People should know about this place; before it’s junked up, before its forced to surrender its emptiness to an irreversible wave of development that will, despite the remote harshness of these lands, inevitably swamp it.

It’s really why I write. To celebrate, to record the land. Do I do it for me? Mostly.  Do I do it for you? Some. There’s no writer without a reader. I do it for the most part for the land itself. And the spirits that shriek upon its wind.