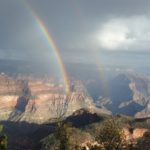 Lives Up to Its Name

On the Grand Canyon’s North Rim, across gravel roads 39 miles from Jacob Lake, I arrive at Parissawampitts Point, a vista point just west of the National Park.  The forecast calls for rain over several days.  The rim cools down, devoid of people in its early October mien near the NPS closing point of the 15th, where it will slumber beneath a blanket of snow until March.

It rains that first sunset.  The sun drops down behind clouds and rain falls in a blue net over the western sky, filtering the sharp disk of the sun.  Purple storms to the south.  Rain clouds capture and reflect back the hues of the drowned sun in bands of violet and brandy, rust and crimson. I watch the face of the sun dip below the Uinkaret Mountains.

The soft saddles of the western Canyon wash to metal hues, ill-defined.  A still serviceberry dotted by cool raindrops grows out of a cleft along the rim.  Ponderosa stand in trackless rim forests behind me.

The Rainbow Rim Trail wanders east from Parrisawampitts Point, the westernmost rim outlook accessed by the Forest Service roads which service the trail.  The trail, made for bicycles as well as bipeds, is mainly a forest path, at least as far east as the 8 ½ miles to Locust Point.  Parts og the trail shrouded in mixed pine/aspen forest remind me of the North Woods of Wisconsin.  Groves of towering ponderosa, blacked by fire, dispel that impression. Dead trees have been cut down, giving the ground the airy feel of a redwood grove.

At other points, the trail traverses the cuts and drainages that funnel down from the Kaibab Plateau, and the rim lends itself to a mountain landscape.  When brush oak grows into the size of trees and fiery autumn aspen carpet a particularly deep ravine, the rim seems like an Eastern broadleaf forest, or like something out of a fairy tale. At these points, the North Rim is an arboreal wetland with water-hogging species like maidenhair ferns and apple-red maples hugging the deep, forested swales and drainages.

Sunlight winds through the branches of the forest along with a breeze that carries the sweet smell of duff.  Beyond the tangle of limbs that represent the front echelon of the rim forests, the sky clears.  No more trees.  No more land.  I reach the shore of a great ocean, one of air instead of water.

I decide to take in a wide view at a shady spot under a pinion.  Its wandering limbs twist in diminishing corkscrews from limb to branch to twig, repeating in fractal patterns, swirling like the long hair of a Lorelei underwater.

Out in the canyon, chain mesas float in midair, cloaked in forest.  The ghost-like silhouettes of the San Francisco Peaks are sharp graphs on the southeast horizon, and the Uinkaret Mountains, low and soft, loomed west.  These far apart mountain ranges remind me that surrounding this center of the Earth called Grand Canyon, a not-so-distant volcanic past intrudes, portending a possible future.

I hike the Rainbow Rim Trail to Locust Point.  Rock-locusts, camouflaged in their limestone patina, kick-start themselves down the trail to avoid my giant footfalls.  It’s their Point, after all.  This lookout probably has the most panoramic view of all the panoramicest points in the canyon, North or South.  I can see the White Cliffs far northwest in Utah, and over to the lava fields north of Mount Trumbull. I pan all the way to Mount Humphrey near Flagstaff, perhaps taking in a 300-mile arc.

The next day, strong southern winds bring together two converging thunderheads with tops wiped like swabs at the height of the tropopause.  The storms collide head-on with the North Rim.  I slip on my rain jacket.  Three storm clouds in the same front mushroom before my eyes as they barrel my way.  I rush on my rain pants.  The storm complex, a mirror of the Canyon complex, descends like landing ships, washing out the central peaks of the Uinkaret Range.

Hard rains in the distance obscure the South Rim in sections, occasional cloudbursts for an unslaked land.  I cross a length of rim trail denuded of trees but for the shelter of a sprawling juniper.  It’s marked by a double-trunk stump, and so I name it Double Trunk Stump Overlook.  I wait out the storm.

I read a few paragraphs, highlight a few lines, maybe jot a few phrases of description in my soon-to-be soggy notebook about the Uinkarets, which I’ve spelt as many different ways in my notebook as I’ve had occasion to write the name.

Several air miles below, the Inner Gorge trends due west in a zigzag of dramatic cuts as the schist scarp meanders along the rim of the Esplanade.  The wrinkled relief of the Inner Gorge is most striking at sunrise or sunset, when shadows crawl out of their keeps within the crevices.  The benches above the Inner Gorge stretch wide in the undulating plains of the Tonto Platform below the South Rim and the Esplanade below the North Rim.  The vast bench makes a wide arc southwest, paralleled by escarpments skirted in talus which all snake toward the Vulcan forms at Toroweap, the remains of not-so-ancient lava flows.  Lightning flashes from the storm’s underside.  Faint booms mark its distance.

From the Rainbow Rim Trail, I can see the Inner Gorge on its straight course southeast. A leader of lightning spits out into the inner canyon.  Painted dark now by the storm, jagged teeth that mesh on either side of the unseen River mark the Gorge.  It seems as if a massive fault opens up before my eyes to swallow all made things.

To escape the rain, I go back to my camper and indulge in some unmystical vice: sugary treats of great evil, casting a small dark night over the soul.  Then the clouds clear, and I return to my double trunk stump for some healing, and some digestion.

In the western canyon, dirty sunbreaks that reflect my dishwater soul wander north and south in pyramidal shapes, alternating with deluges of distant cobalt rain that wash out my vision of Mount Trumbull, highest of the Uinkarets.  Golden fallstreaks crisscross shafts of rain at 20-degree angles, glancing swords in battle.

The Inner Gorge fills with mist and light.  Far off kettles saturate with silvering rain. Stormwater bathes the gleaming stone of the canyon.  The sun drops down from the last of the storm and laps in a pewter cast all the parallel ridges and hogbacks and headlands of the side canyons, which stack to the horizon.  Sunset and the rain brush every formation with soft edges.  Rays of dusk shoot through the mists.  A golden, windless song.  The Canyon itself dissolves into the light.

I glance back east over my shoulder.  Back-framed by a storm-darkened sky, a rainbow arcs from horizon to horizon above the rim forests.  In moments, as the sun sinks behind yet more storm clouds edging up over the rim, the blued Inner Gorge clarifies from silver fog as sun showers fly off in molten sparks.  The Rainbow Rim Trail lives up to its name.

← Narrow Canyon is Why I Write
The Plateau →