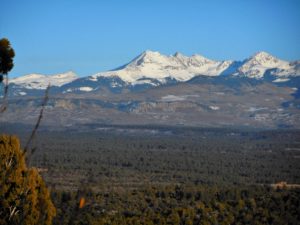 Dibe’ Ntsaa, Mountain of the North

The mountain you see is known as Dibe’ Ntsaa, the Navajo Sacred Mountain of the North. It represents the northern boundary of Dine’tah, or Navajoland. The old stories associate it with the color black. First Man created it as a replica of mountains in the Fourth World. With a rainbow, he tied it to the ground, then shrouded it in shadow. Geologists may have quite a different interpretation of the origins of what Anglos call Hesperus, named from a different myth. Of course, the origin of that name is Greek. Plato, also Greek, talked about the world of forms, about how every object in our world had an ideal counterpart from which it was fashioned in an ideal world. Is this really so different from the Navajo myth, where First Man modelled Dibe’ Ntsaa on mountains he’d seen in the Fourth World?

In my novel, The Crippy, Mitch Cantsee, a half-Navajo, half-Anglo man trying to come to peace with his bicultural origins, grew up not far from the base of this sacred place. Into his care comes a child, Sam, an 8-year-old girl who claims to speak any language after reading or hearing just a few words. In this novel of mystery and science fiction about whether our pasts are even real, Mitch and Sam encounter strange, otherworldly creatures called the oglethings which alternately protect and attack them. They set Sam and Mitch on a chase across the American West in search of a mountain which Mitch sees in his visions.

The Crippy describes the life and poverty in a small western town. It deals with origins, the meaning of dreams, and questions the nature of the reality in which we think we live. Sam and Mitch travel far to encounter the mysterious mountain of Mitch’s vision, and to unravel the mystery of why everyone from Men in Black to horrifying extraterrestrial creatures that can assume any form are after Sam, a girl orphaned by the world.

In The Crippy, the journey ends perhaps where it was begun. Do any of us really have to leave our selves to discover the world outside? Ot is it really inside? To find out more, go to https://www.amazon.com/s/ref=nb_sb_noss/145-7995152-2338969?url=search-alias%3Daps&field-keywords=the+crippy