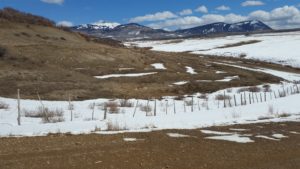 You’re looking at the backside of the San Miguels, near a place called Groundhog, in mid-March. It’s still near impossible to get to the actual Groundhog Lake this time of year. Snow and mud will stop you out, as two vehicles which passed me by as I walked the road found out. Sunny, snowbound, open: what a setting for the supernatural. My novel, The Crippy, takes place near here. Mitch Cantsee, the main character of that novel, might’ve come up here to party back in the day.

Most people see the other side of these mountains, traveling up Highway 145 from Dolores to Telluride. I prefer the less peopled side of these westernmost of the San Juans, which in turn are the west-most of the Rockies. Although much of the land is privately owned, it’s still ranch land. The housing tracts haven’t started up, though LAND FOR SALE signs are more plentiful than horses, and summer homes graze the meadows.

This is high country, not quite tundra. You’ll see aspen, ponderosa. Mountain park and rangeland open up the land below the peaks in the photo. The winds seem never to stop blowing. Take a look at the picture of the snow in the photograph below.

Note the rusty hue. No, it’s not snowing cherry Slurpee. To the south and west of here, in AZ and UT, the land dips into high desert and semi-arid plateau, lands filled with iron-banded formations. This sandstone erodes back to sand. During massive windstorms in the spring and fall, those red soils get up on their haunches and stride right over the border, depositing fertile topsoil in the rolling farmlands below. Yet a lot of that red soil whips up into clouds that end up in the mountains, dying the snowpack red, high in these peaks. A single storm can tint the summits, casting unparalleled alpenglow and sunsets tinted toward wine, with electric blue backdrops behind the peaks.

Yet there’s another, less visual side effect. The red particles act as snowmelt. They accelerate the spring melt and they speed up evaporation. This is one reason why water shortages persist in the southwest. There’s less runoff into the vast reservoirs like Powell and Mead, and also into the smaller regional lakes like McPhee, which lies just below these mountains. Fire seasons worsen. Less water for livestock and irrigation. It seems, as I walk through them, as if the snows are endless. But it won’t seem that way come July, when the dry lightning ushers in the fire season.

I live in a major fire zone. Yet I try to accept it. After all, I choose where I live. I make choices. My life is the sum total of all the choices I’ve made. It’s the same with Mitch Cantsee, the hero in The Crippy. He’s made choices and now seems trapped by them. He’s signed away his kids, slammed meth, dealt drugs, accrued a record. Now, when he’s trying to get out of the life, he’s pawned an 8-year-old girl by one of his customers, and he takes the child to save her life. He sees this little girl, Sam, who has a gift for languages, as a major obstacle to his plans to turn his life around. Yet maybe this child, who claims the ability to speak any language after hearing just a few phrases, is part of his redemption.

In equal parts suspense, mystery, fantasy and science fiction, The Crippy starts with Sam and Mitch on the run. If you like stories like these, you can purchase it at https://www.amazon.com/s/ref=nb_sb_noss/138-8297957-3455132?url=search-alias%3Daps&field-keywords=the+crippy.

← Dolores
The Mystery of the Mountain of the North →