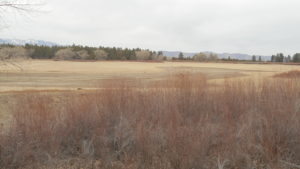 When I post (which hasn’t been for a while), I often place some picture at the top of some fantastical place you might want to visit. In the photo above, you’ll see a more ordinary world, what I see almost every day: Summit Lake. Doesn’t look like much of a lake, does it? Sometimes, after very dry summers, it may look like this in the autumn. Although it usually doesn’t start to fill in until later in the spring, this reservoir still looks low, even for the time of year. The shot you’re looking at here was taken in mid-April, after one of the driest winters since they started keeping records. There’s still some snow in the mountains, so runoff will pick up as the weather warms and irrigation water is released. Yet we are in extreme drought, and the National Forest Service, along with the NOAA, has warned of elevated fire danger.

Trees are under stress. Usually hardy Colorado juniper are turning red. The spring windstorms have blown unusually strong this year. The mountain snow, which used to last until late June, might be gone in a few weeks. Weather forecasters categorize the obvious: extreme drought. If the wind blows the red sands in from the southwest as it usually does, the snow up there will turn red, and that will accelerate the melt.

It’s been called the winter without a winter. Firefighters that have left to battle blazes in other states are telling us that they’ll see us later in the season. It’s a matter of when, not if, the fires break out. Last summer, due to a very late, hard frost, berries and other edibles that bears surfacing from their winter dens rely upon to avoid starving in the spring were killed off, leaving the bears in a once in a century die off, according to some observers. This year, that same extreme cold has resurfaced after such a mild winter. It’s supposed to get down to 18 degrees F tonight! More late frosts, combined with the drought, mean there’s not much to eat for the bears again.

I’m not writing this to assign cause or ring any bells. Do I believe that humans have caused or accelerated global warming? I do. But if you read scientific texts, you’ll see that the earth has entered into periods like this before, and that it’s difficult if not impossible to implicate warming as the cause(s) of any individual, regional climatic event, like a drought. I’m just letting people know what’s happening in the southwest this year. Puett Reservoir at the bottom of this post? Sometimes, it reaches up near the road. As Puett is an irrigation catch, it should fill later. Let’s hope.

Puett Reservoir, usually near the road pictured at bottom

← The Mystery of the Mountain of the North
Dry Gulch →