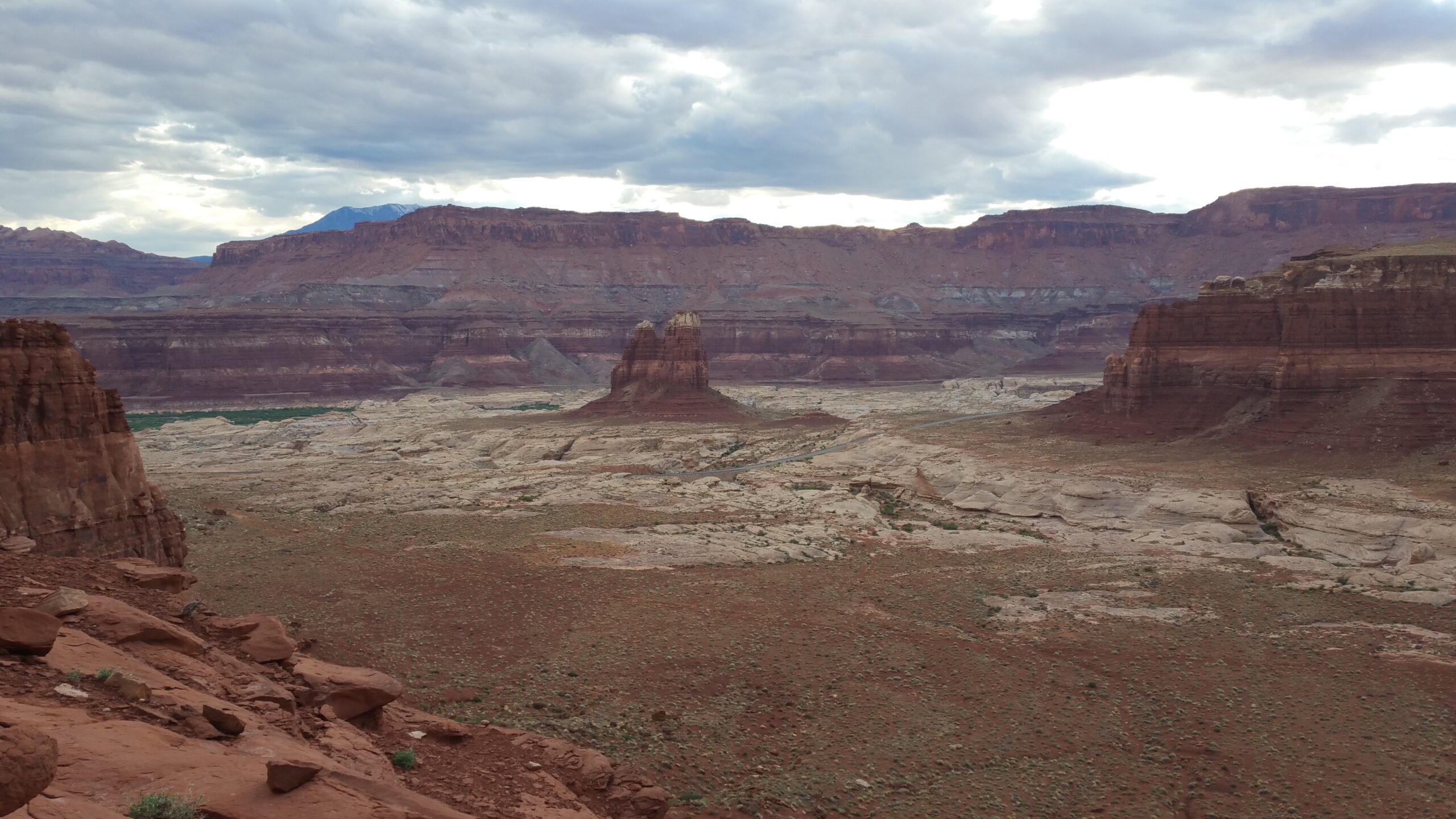 At rim of White Canyon, with Henry Mountains

People often ask me what I was doing before I started writing. Well, no they really don’t, but I’m supposed to blog about stuff like that to sell my books. But, if you were to ask me what I was doing before I started writing, I’d tell you that I was going to places like White Canyon, pictured above. Much of my writing incorporates places I’ve been. I do this for three reasons. First, places like White Canyon and its environs deserve to be explored. I live in a relatively untouched part of the country. The Colorado Plateau is unique in some respects from the rest of the planet and deserves description. It should be catalogued in its present form before it’s destroyed like everywhere else. The cultures of the people who live here need to be memorialized before those cultures are overrun and absorbed into the larger mainstream culture. The road is the story, or at least it takes place there. My novels are part travelogue.

Second, these places often serve as characters in their own right. They shift between sublime beauty, desolation, solitude, and the punishing elements. These environments force the human characters lost or running through them to adapt.

Transformation happens in deserts, deep in defiles, or on mountaintops. The inner journey is reflected in and is influenced by the outer journey. Here, strangers are encountered. Some are allies. Others are enemies. I’ve studied the work of Joseph Campbell. In The Hero with a Thousand Faces, popularized for the Hollywood set by Chris Vogler’s The Writer’s Journey, Campbell writes about a 12-stage trek undertaken by the hero (used interchangeably for male, female and other genders). The hero receives a call to adventure and, as a result, leaves her ordinary world for a special world where tests, allies and enemies are encountered. The road is that special world. White Canon, pictured above, is a special and alien place.

In The Crippy, the main characters, fugitives from their ordinary world who are chased by the law, wander through these red rock labyrinths. The rock formations, the scoured blowouts and windows and arches, are as close to extraterrestrial as any place on earth.

And for this final reason, I write about places like this in my novels. These regions are a special world, an ally and an enemy to the characters who become lost in them. These lands add an air of mystery, haunting, and, where appropriate, menace. My characters usually travel in desert and semi-desert environments, sometimes in lone mountains not visited by people. Belden Lane writes about these places in his books: The Solace of Fierce Landscapes and Backpacking with the Saints. He writes that people on the fringes visit, wander through and live in places like White Canyon, in deserts and mountains regarded as haunted by civilized folk, because they want a taste of the ethereal, but only find it in the austere.

That’s what I did before I wrote. I explored desolate places like White Canyon. It tracks Utah Highway 95 from west of Natural Bridges National Monument all the way to Lake Powell. White flows from the Abajo Mountains and wends west to its confluence with the Colorado. Every seep and spring, each chasm and gorge out in these arid, rolling sandstone seas for thousands of square miles empties itself into the Colorado.

White Canyon drops hundreds of feet in places. Its narrow, jaw-like channel constricts to narrows permanently flooded with water in places. Its buffed clifftops are sanded into slickrock, a natural skateboard park. Rocks are twisted and blown like glass into lizard and driftwood shapes, into the seeming bones of creatures as old as the rock.

You’d be forgiven if you came to this website and mistook it for a blog about the Colorado Plateau, about spires and citadels holding out against the erosive forces of water and wind. This website is really about books, but books which celebrate these arid, high, windswept plateaus where you can almost see forever.

To get there: From highway 191, which connects I-70, Moab, Monticello, and Blanding with the Navajo lands, take Highway 95 west past Natural Bridges NM. As the highway goosenecks past towering mesas on the west, on the east, you’ll catch glimpses of White Canyon as it does its own, on-again, off-again dance with the highway. There are many good put ins, but be aware that they are only for your legs and not your kayaks.

Mike’s other titles, including The Dirt, The Mind Altar, and Canyon Calls, are available through this website or through Amazon at https://www.amazon.com/-/e/B002

← Muley Point
My Own Back Yard →