How many times have you wandered far, looking for something that sat under your nose? Maybe looked all over the friggin’ house for the car keys, only to find them in – that’s right – your hand.

In the larger sense, I sometimes live my life like that. I search the world for my love. I roam the globe for purpose, mission. I’ve crossed continents, climbed mountains, submerged myself in canyons, trekked deserts, all looking for The Answer. Some call that answer happiness. Others fulfillment. Yet for others, it’s true love. Whatever it is you search for, you find it in the last place you look, right? Oh, don’t deny it. Of course, you do. Because that’s when you stop looking, whether it’s for your reading glasses (I call them cheaters) or for your mate (who should never be called a cheater). 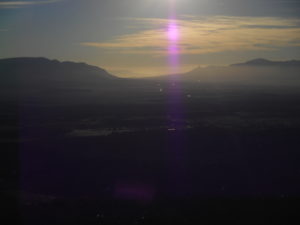 The picture above is an unfiltered, unretouched photo of a sunset taken from Montezuma County, Colorado. It peers through the false saddle framed by the cliffs of Mesa Verde National Park on the left, and the ‘toe’ of Sleeping Ute Mountain on the right. Sleeping Ute Mountain is really a range of lacolithic peaks in the extreme southwestern portion of Colorado. These remnants of a once-subterranean ‘volcano’ lie at the foot of the Ute Mountain Ute land, and the Ute people have crafted sublime myths to explain the mountain’s uncanny resemblance to the profile of a man lying down, his face to the west, his arms crossed over his chest.

You really have to strain your eyes to see the distant ranges which lie in the middle of the image. They’re the Carrizo Mountains in Navajoland, otherwise known as Dine’tah. They must be 50 miles away in Arizona. The point is this: despite my wanderings north of the Arctic Circle and on continental landmasses other, I simply walked to the top of a hill called Summit Ridge behind my house and there, there set one of the most majestic suns ever I spotted.

In The Crippy, a man named Mitch Cantsee, a man of Navajo and Anglo descent who feels at home in neither world, grew up in a small town of the high desert plateau at the foot of Sleeping Ute. He, too, is a searcher, forced to wander the Navajo lands in search of an answer to a riddle, the solution to which his own life and the life of an 8-year-old girl named Sam may depend.

Mitch’s search has him roam across the Colorado Plateau, the very edges with which you’re teased in the above photo. It has Sam and he forced across the even more planetoid scape of Death Valley, chased by creatures the likes of which the world has never seen. Up desert basins and over the frosted tops of the High Sierras, they traverse volcanic worlds until they reach the snowbound Cascades and Crater Lake, Oregon.

Abetted by a shapeshifting creature which Mitch christens Angelfire, they look for a mountain of the north, a pyramidal shape which Mitch believes will as the redeeming vision that compensates for his wasted life. Yet is Mitch victim of the delusion Dorothy suffered from when she sought the way back to Kansas through an Oz of witchery and misguiding fairies?

What’s a crippy? In the novel, Mitch’s charge, Sam, is. A crippy is a solver of puzzles. And riddles are the bricks in the road which Sam and Mitch wander down. Our lives are a mystery to us. We ask where we came from? Where are we heading? We even wonder who we are?

In search of new lives, Sam and Mitch traverse half-a-continent. Yet it might be best to ask of any story: isn’t the answer to the end found in the beginning? Did you ever really have to leave your own back yard?