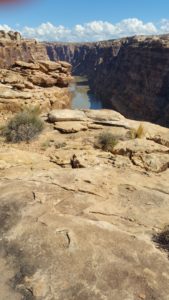 This would be your cubicle

The title of my latest book is The Dirt: The Journey of a Cowboy Mystic. We have cowboy poets. Why not cowboy mystics? After all, the one essential quality of the mystic path is that it chooses you as much as you choose it. No one can really set out to be a mystic. “Oh, I think I’ll give away all my things today and go into a trance.” Doesn’t work like that. No one can claim mysticism. It’s kind of like claiming sainthood or humility or wisdom. If you think you got it, you don’t. The truth is slippery, elusive. You can’t catch it in a net or at the end of a fishing line. It doesn’t try to evade us, yet to borrow a line from a famous text on the subject: the truth isn’t absent in the world, but it is obscure.

The world is a very distracting place. And with all the sound and light and flavor, it’s hard to see what may lie beyond it, much less to stay on track to get there. The happenstance calamity. Ambition, desire, power. The pursuit of gold or of what lies between the legs; these drives and misfortunes at first seem to obliterate the truth. The want of them speaks first, and speaks loudly, the hint of desire chasing away the truth the way your mere glance at a butterfly seems to brush it off your shoulder.

There really is no education, no degree you can get to become a mystic. You may think that a good religious upbringing prepares one for it, but this may actually interfere with the process. The mystics have this in common: though they may be schooled in a particular philosophy or discipline, they end up leaving its shores and sailing off beyond the sight of land. Almost without exception, the mystics were iconoclasts. They broke molds rather than clung to them. They found confining the forms of the particular schools of thought in which they were trained. They understood that religion and philosophy are mere starting points. They discovered that religion emphasizes form over content, and that content is all.

And so it was with Yale Forestall, the hero in The Dirt. He abhorred form, eschewed the commonplace without condemning it. Like all teachers, and I use the term in its loosest sense, he engaged with people, but just as often struck out on his own. Like many in his nonexclusive nonfraternity, he found solace on mountaintops, in the austerity of deserts.

Mystic. Teacher. Holy person. Bodhisattva. Some may claim these mantles for themselves, but if they do, then they probably aren’t what they claim to be. Truth is never in a definition or a title. Because it’s not about thinking. Words and definitions are limits. They represent empty intellectual forms.  And yet, they’re all we have with which to paint the pale shadows of the truth. That’s what The Dirt is about.

The truth isn’t about having or possessing. Still others may seek the truth in a particular experience with which they’ve become enthralled, yet they won’t find it there either. That’s what Yale tried to to his sole disciple, a disillusioned ex-lawyer from the big city, Miles Holland. The truth can’t be sought since it’s not lost By seeking it, you push it away. You push it out of awareness.

Someone once said, if you want to be happy, then just be. And that’s the ‘trick.’ But being is the hardest thing to do, because it’s not a doing at all. We’re not human doings, but beings. We’re not human beings having a spiritual experience, but spiritual beings having a human one. To go out and sit in the woods and not think: that’s the hardest thing in the world to not do.

It’s not a process of addition that lets you discover it, said a renowned medieval mystic. It’s a process of subtraction that does. Many believe that it’s in the giving up of something that the truth will be found, in a sacrifice of something dear to us. Yet as long as you think you have to give something up, you’ll never stumble upon it. Because you’ll cling to that thing as to your very name and body and to the suffering that you think comprise you. Because you’ll believe that only in giving up everything will you be able to pay enough, to earn enough, to purchase it. If you needed to pay for it, you’d turn it into goods bought and sold. There’s nothing to yield, nothing to surrender, nothing to be earned or suffered over. If you think that you have to work for it, then there’ll always be someone else who hasn’t suffered and sweated and slaved and who doesn’t deserve it. If you could pay for it, it would be a cheapened thing indeed.

When I think I have to earn something I already am, to be somebody that I think I’m not right now, to get someplace I’m not yet at, into some impossible future that can never be now, I admit the possibility that paradise isn’t everywhere, and that nirvana isn’t all the time. If these were worthwhile states, if they were real, if they were all the sages say they are, then they couldn’t be anywhere but here now. The infinite can never not be here. The eternal can never not be now. They can’t be lost any more than innocence ever could be. Only in time can anything change.

To seek it in a place called heaven? It’s not there either. To seek it in an afterlife is to squander the life right in front of you. Heaven isn’t a place. There’s no ‘there’ that’s not already ‘here.’ To seek for it in a time which isn’t right now is a mistake, because there’s no unfulfilled condition which when satisfied will make you happy then. I’ll be happy when… That’s a sentence that guarantees unhappiness. That’s what Yale tried to teach Miles.

I’m most spiritual when I’m not trying to be. When I’m not trying at all. Because everything – every moment, each act – is spiritual. To think of some things as sacred while others are profane is to think that we can parse the divine from the commonplace. Yet if the divine is all-encompassing, then there’s nowhere it isn’t.

← The World’s Nature
Writing: It’s Between You and Yourself →