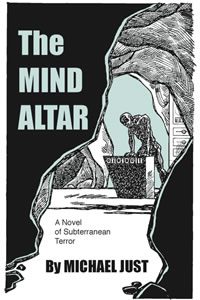 Are you afraid of what lies beneath?

Ever since the Morlocks of H.G. Wells’s The Time Machine, every era of science fiction and horror has its underground stories, its subterranean tales. Even thousands of years, the underworld was the subject of mythology. The underworld genre has been criticized because the world created often takes no real account of what it would be like to explore under the surface. In the horror novel, The Mind Altar, the underground is the setting.

In many stories, the physical setting of a novel is also a character. As a lover of the outdoors and a traveler of the American road, most of my novels take place on the go, showcasing places I’ve been, usually exotic terrains which readers may visit without ever leaving their living rooms. Ever since I wrote Canyon Calls, a collection of short stories about Grand Canyon, the endurance-testing journey of a harsh and alien environment is a theme in all my work. The Crippy is no different, a novel where two fugitives set out in exile along the open road of Navajoland. It’s fun to set your people into conflict with the landscpe as well as with each other: being hammered by storms and heat and summits and canyons. So, my fiction is always part travelogue. You can find free, downloadable essays about my real adventures in these places under the page https://justmikejust.com/category/inspirational/

The Mind Altar is a bit different. The story begins when seven of society’s misfits, each with special skills, venture underground, beneath a remote desert mountain which houses a supersecret prison for the criminally insane. Besides spelunkers, who’s suited for that? I’m not a caver. So I had to research that world, get it as accurate as possible for the purposes of the story. This labyrinth represents an additional nemesis to the expedition. Being buried alive is our greatest fear.

← The Mystery of the Mountain of the North
Lamb →