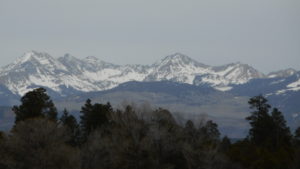 Where I Threw-Up my Ghosts

I grew up in Chicago, in the heart of the North Side. As a boy, I recall going to my grandma’s house a couple miles away for dinner on Sunday afternoons in the summer. She lived a couple blocks from Wrigley Field. I’d be in the yard playing. When the Cubs were in town, you could hear the crack of the bat, the roar of the crowd. I’d run inside. The TV was tuned to the game on channel 9 and Mom and Dad and Grandma sat around it, drinking coffee. On her portable black and white set, Jack Brickhouse would be shouting Hey Hey! The camera panned the bleachers on Waveland erupting. Another Cubbies home run.

I look out from my porch and see the reservoir across the road. 60 miles west-by-northwest, a Bactrian hump several thousand feet high floats on the horizon line, just over the State line. At the base of these Abajo Mountains, Monticello, Utah, the next state over, boasts an LDS Temple. When first I moved here from Chicago, the Four Corners seemed such a wilderness. Utah, Colorado, New Mexico and Arizona gathered here in the checkers of a vast quilt of mountain and high desert, of Navajo and Ute, of Latino and Anglo, of Latter Day Saints and old Spanish land grants.

“So tell your story, Miles,” Josh said one afternoon when we camped too much and drank too much on the top of a mountain. Hesperus, to e exact, in the La Plata range.

Josh, a Navajo criminal defense attorney, acted as a Guardian ad Litem in the guardianship case I was defending. I’d accidentally gotten myself appointed as Yale’s expert witness and as his lawyer, even though I had no idea what I was doing. Udenni, my girlfriend, was up on the shoulder of Hesperus with us, too, this summer twilit evening as the gloaming settled on the summits.

“Anytime a reasonably inteligente hombre such as yourself has a law degree but ends up in the financially marginal and definitely unstatus-like position of clinician, I sniff me the whiff of something awkward in his backstory,” he said. “Why are you a counselor-of-mental health instead of a counselor-at-law?”

“Shiiit,” I mumbled with a smile, rearranging pebbles beneath my camp shoes. “I don’t wanna talk about it.”

She cleared her throat. “I’m not at liberty.”

“You’re always at liberty,” I said.

Josh looked at me and commanded: “Tell.”

“What does that mean?” Josh wondered.

“I was a patent lawyer.” Josh laughed.

“That makes the papers in Chicago?”

I didn’t feel like going on. He’d have to pry it out of me now, especially with Udenni there to hear it all over again. Josh quieted. He seemed to sense that he’d shut me down. “Patent lawyer, huh? They usually have technical backgrounds,” he said.

“I have a bachelor’s in physics.”

“MIT.” I hated admitting it. It made everything I’d accomplished since then seem like a come-down.

“Shit. You’re a genius. The only one in Montezuma County. Where law school?”

I didn’t want to say it.

“Harvard! You are a fucking genius.”

“Stop calling me that please.” “

Sorry genius. How did you get into the papers that way? Patent law’s the most unpolitical —”

“— boring kind of practice there is.” He reared back and studied my jaw, which resumed chewing on an old cud that I’d regurgitated over and over since I’d left Chicago. “That’s it, isn’t it? You were bored, so you took on another kind of case.”

“I got to admit, Josh, you have good instincts,” Udenni said. She’d grown sullen, introspective. Josh’s new line of questioning had pissed all over our fire for each other, which died along with the sun.

“Miles was an associate in one of the top patent law firms in the country, Josh.”

“Boring,” I sung to myself.

“So I got into the PD’s office. I quit patent law and hired on at the Public Defender in Cook County, back in Illinois.”

“That Chicago?” Josh said with a little sympathy as he breathed out smoke from a cigarette he lit from the fire.

“Yeah. The PD’s office — it’s trial by ordeal there. They throw you in the deep and see how long you can tread water. I picked up a murder case the second week I was in.”

He nodded. “PD’s get the same initiation everywhere,” he said. “I started out in the PD’s office.”

“Then you know. But it was worse than that. It was a set-up. Nobody wanted the case and I couldn’t figure out why. So like an idiot I took it. I jumped at the chance.”

“Who was your defendant?”

“My client was a babbler. Religious delusions. He pours lighter fluid all over his therapist and sets her on fire. Thought she was Beelzebub. It was bad, man. She died of the burns. The ASA — Assistant State’s Attorney — he’d introduce the pictures.”

“To inflame the jury,” Udenni said in a muted way.

“So you filed for insanity?” Josh said.

“Means you plead not guilty by reason of insanity,” he explained.

“Of course,” I said to him with a side glance. “His victim wasn’t only Florence Nightingale. She was the daughter of a State Senator.”

“Oh, shit,” he said. He looked ahead like he was remembering some bad case of his own. Every lawyer had ghosts like that.

“The State’s Attorney, the judge; they wanted me to plead my guy GBMI — guilty but mentally ill. You know what that deal’s like?”

“I think they’ve got those statutes all over the country. It’s a meaningless classification that throws a guy in the pen with the culpable killers.”

“That’s right. That’s right,” I said. I patted Josh’s shoulder. He was the first man since I left the PD’s office who knew what I’d gone through. “GBMI means no hospitalization, no release from prison upon a psychiatric finding of harmlessness. They throw you in with gen-pop. It’s bullshit.”

“But your guy was guilty, and he was mentally ill.”

“Fuck that. I wouldn’t plead to that. Anyway, the case gets all over the Chicago Tribune and the Sun Times and radio and TV. I mean, lighting up your therapist like that? I had to take the insanity defense to a jury.”

I sighed. I’d needed exculpation from another lawyer, from a defense lawyer like Josh. Sounds like you had to. I’d needed that for years, and no priest or shrink or therapist or girlfriend could give it to me. It had to come from someone like Josh. He looked at me, waited for me to go on. Udenni squirmed, discomfited, looking away, picking blades of grass like a child.

“The first jury I ever did,” I said. “The first case I ever tried. I was a patent lawyer.”

“And?” Josh said. He wanted to know the verdict.

“But the judge, that fuckin’ 26th and California hack judge,” I rued. The felony courts imposed themselves on the corner of 26th Street and California Avenue. They stood in front of Cook County Jail, a concertina-wire affair that resembled a death camp on Chicago’s brutal, post-industrial South Side. “That judge had been a law partner at the same mega-firm as the State Senator, the father of the victim. And they were second cousins to boot.”

“And the judge wouldn’t recuse himself. Said the relationships between him and the Senator were ‘attenuated.’ Said he never interacted with the guy.”

“I got some advice, from a street fighter just like you. He told me to try the judge, so I crucified the motherfucker in the press, pretrial. I filed a complaint against him with the Judicial Inquiry Board.”

“You gotta understand — Cook County’s Montezuma County,” I said, trying to justify myself as Udenni played with pebbles and twigs, looking over at the Basque shepherd and his flock of angora munching the lush, mountainside grass. “In Cook County, the judiciary’s Irish and everybody’s somebody’s cousin. Least that’s how it was back then, Josh. I mean, I knew a Greek woman who changed her name to Rose Kelly so she could get elected judge.”

“All politics is local.”

“Yeah, and after it was all over, I was the one who got beefed to the Attorney Registration and Disciplinary Commission. On some bullshit complaint of burying a damning fitness eval a shrink had done on my client.”

“No! I aborted the exam before my expert even finished it. Once he told me what his findings would be — that he’d conclude my client was fit to stand trial.”

“Did you get suspended, Miles?” Josh asked.

“No, I beat the ARDC beef, but it didn’t matter. After that, I was blackballed by the brotherhood of judges. I couldn’t get a good ruling on a motion. Couldn’t get continuances. Got yelled at by every judge in the county if I showed up two minutes late to a court call. Clients wouldn’t touch me if they knew who I was, which they usually didn’t in the PD’s office. But I couldn’t represent defendants knowing that they’d get the worst possible deal on every plea the State pissed my way. Prosecutors didn’t have to offer me shit. I mean, I couldn’t take cases knowing that. Finally, the PD’s office transferred me to Traffic Court, and when I got tired of that, I walked. Private practice was out of the question for the same reason. So I gave up my shingle. Kept my license but gave up the practice.”

“You know, patent law is firm work. Really clubby shit. A few firms have all the work tied up. It’s not really for individual practitioners. With me in the papers and the ARDC complaint, no firm would touch me.” Josh glanced at me again, patted my back.

“My father was a judge.”

“I remember when I was a kid. When my dad still lived with us. He’d come home from work and I’d have this courtroom rigged up in our basement. I used an old kitchen table for the bench and a ball pin hammer for a gavel. I’d set up a couple of play chairs for the witness box and the clerk’s box. I knew what it all looked like because he’d take me to chambers on the weekends sometimes and let me sit on his bench and play around with the gavel. I’d make my mom crouch down on my little jury box, an old crossbeam lying on the floor. My dad was counsel. I, of course, was the judge.”

Udenni and Josh were the jury now, sitting on a log. They reminded me of children rapt on a campfire story.

“But my dad always ended up where he belonged, behind that kitchen table with the ball pin hammer in his hand, ruling on my motions for more allowance and for staying up later on weekends. Me? I always felt happiest on the other side of the bench, arguing before that jury of one — my mother. It’s all I ever really wanted to do.”

“I’m sorry, Miles,” Udenni whispered. She sidled over on the log, put her arm around me, and sunk her head into my shoulder.

from The Dirt: The Journey of a Mystic Cowboy Available at

This post regards a work of fiction. Names, characters, places and incident are products of the author’s imagination or are used fictitiously. Any resemblance to actual persons or events is purely coincidental.

← The Passing of a Man Already Dead
Approaching the Inmost Cave →