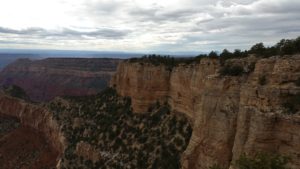 Mt. Trumbull and the Uinkarets, on the horizon

What would you do if you had to come here to hide? The Crippy, a novel which contains elements of mystery, suspense, science fiction and fantasy, will introduce you to these trackless lands.

You’re looking inside a 277-mile-long throat, almost 20 miles wide in places, and up to a mile deep. Much of it is desert, though it vaults up the life zones to nearly 9,000 feet, which is high country, montane forest. This picture is taken from high country like that, staring down into desert. There are thousands of square miles to hide here. The roads leading down to these rim forests go on for more than 40 miles before you land in nowhere. On the way in, you’ll encounter parks and meadows and you might feel as if you’re up in Montana. It’s here, in this wild, untamed land, that Mitch Cantsee and his charge, 8-year-old Samsara, choose to hide in my novel, The Crippy.

I’ve spent a great deal of time on the North Rim of Grand Canyon, which marries mountain forests that edge up to soaring cliffs along plateaus like North Kaibab and Powell with canyons that interfinger with headlands and promontories like the ones in the photo above. There’s even a hybrid forest bison that’s mated with cattle in these parts. So, it is a lost world, hiding in plain sight. Here, ponderosa tower, the highest I’ve ever encountered. When the wind roars through them, it builds into a thunder reminiscent of the taiga forests of Canada. You can comb through the posts on this page to learn more about these remote accesses to Grand Canyon.

Out here you’ll find Imperial Point, Saddle Mountain, Nankoweap, the Rainbow Rim, Powell Plateau. Travel farther west to the blue horizons in the picture at top, and you may just encounter Toroweap, said to be the longest straight drop toward the Colorado, at Lava Falls. In fact, in my first book, Canyon Calls, a collection of short stories that take place in Grand Canyon, the cover shows that long stretch of river near Toroweap. 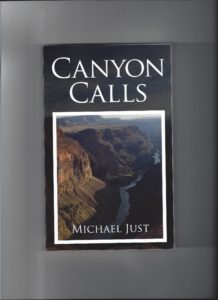 This is in the west Canyon, where the land steps down a bit, maybe 4,000 feet or so from the cliffs. You no longer encounter ponderosa and mountain forest at Toroweap. You’re lucky if you have pinion and juniper for cover.  I came there once in July. I encountered triple digit heat and hunkered down in the shade of a lone juniper, the only mercy between me and the sun.

At Toroweap, Grand Canyon saw relatively recent volcanic activity.  The mountains to the west of here, the Uinkarets, center-right along the horizon in the top photo, attest to the volcanics. An old volcanic field parallels the sharp toothed road to get to Toroweap, which is notorious for flat tires almost all the way out to highway 89, the nearest paved surface. Yet in a way, much of the landscape in this wilderness is paved, with old lava.

Pouring almost right over the rim, Vulcan’s Throne, a cinder cone, towers several hundred feet over everything else. Climb it with tough, long pants even in summer, and in sturdy boots, because the sharp scoriae, cinders, clinkers and peperino which make up the cinder cone cut like glass. Scrambling there is like cambering up a mountain of marbles. You truly get the lesson that life is two steps back for every three forward. On your hands and knees, you’ll make it up a few feet, then slide back down a few.

Try summiting Vulcan’s Throne in summer, and you’ll be muttering and cursing halfway up. The view’s worth it, and by the time, huffing and slick with sweat, you’ve made it to the strato-shaped summit, you’ll understand why the feds have congratulated you with a hiker’s registry to sign even though the cinder cone is only a few hundred feet high.

At one time not so long ago, the lava flowed from here down the North Rim and dammed up the Colorado at Lava Falls, which are a near vertical climb for part of the way from Toroweap down to the river. Lava plugged the river, which backed up into a reservoir. The power of water versus rock always wins eventually. The dam broke and the water flows again, as you can see from the second photo.

The scenes, the topography, the grueling nature of this place, really make for a great chapter in a novel. And so the main characters in The Crippy, Mitch and Sam, must fight off one pretty evil shapeshifter after grabbling to the top of Vulcan’s Throne. That’s after escaping from the authorities by spinning through the rapids, and climbing up the cliffs at Lava Falls. I hope it makes for interesting scenery, and storytelling. 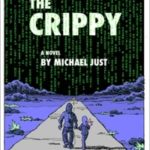