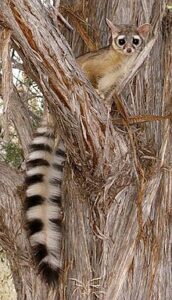 Deadlier Than It Looks

Know what a ringtail is?  I didn’t either, until New Year’s Eve, 1998.  That’s when one checked in to my pitch black hotel room on the floor of Zion Canyon in Zion National Park.  A ringtail is a southwestern relative of the raccoon, though the only resemblance in my book is that they both have the same tails.  Ringtails are quirky little gremlins.  Sometimes near sunset, they’ll zigzag around a campsite in full view, thinking for some reason that you can’t see them, kinda like when you were 11 and didn’t think your babysitter noticed you checking out her boobs.  Ringtails are dangerous, elusive beasts.  At least they are to me, born and raised on the North Side of Chicago.

I’d been out hiking all day, and decided to have dinner at the restaurant, then go straight to bed.  I had to be up early to drive to Vegas in the morning for my flight.  Besides, there are no TV’s in Zion. What were they thinking?

I’m nodding off under the sheets.  No sound.  No light.  Zion is a dark and quiet place without all those TV’s.  Suddenly, a wild, demonic howl explodes from under the bed. The sound of claws tearing up my bedding circles around me again and again.   I stand on the bed, motionless in the utter black.  Will it attack?  Bite? Does it have rabies? An STD?  What the hell is it!?  All I know is, it’s wild and loose in my room.  I muster the courage to turn on the lights.  A thorough search reveals nothing.

I must be losing my mind.  All this no TV.  I go back to bed and switch off the bedside lamp.  Wild squeals and growls whirl around me, like the Tasmanian Devil on too much meth. But with meth, how much is too much, really? I get on the horn and inform the middle-aged lady at the front desk my room’s the territory of carnivorous be-methed voles.

“Oh, that’s probably a ringtail.  They get lose in the ceilings sometimes,” she informs me in her matter-of-fact drawl.

“Do they bite?  Are they dangerous?”

“A ringtail?” she laughs easy.  “They’re about as big as a big squirrel.  If it keeps up, just call back down.”

I’m in a building separate from the front desk, which adds to my sense of frontier isolation.  And a little while later, as I lie in the dark, the thing starts masticating my mattress my room again.  It’s like an animal spirit, everywhere around me all at once.  The Tasmethian Devil, White-Pinkman subspecies, made flesh.  I put in a frantic plea to the front desk as I stand up on a chair.  A few minutes later, this big college kid marches into my room with a flashlight and a skeptical glance.  I’m in my blue bikini underwear of course, a real example of manhood.  Another thorough search reveals nothing. I make him search the linen closet out in the hall.  Zip.  He dragnets the hall and the stairs down to the outside world.  He abandons me to my delusions. I swear I could hear him shaking his head and rolling his eyes as he dissolves into the darkness.

As I hover under the covers in my bed, I await its next demarche.  Will it pounce?  Does it have flesh eating bacteria in its repertoire ?  What if this one’s bigger than a squirrel?  A squirrel could be dangerous, given the right hallucinogens.  Then that wild hissing and gnashing starts up again.  That does it!  I will not be intimidated by a damned raccoon-squirrel.

I stand on my mattress.  I turn on the lights.  Pants-less as I am, I resolve to purge my territory of ringtail.  I put on the nearest foot covers, my gigantic hiking boots.  There am I, in my baby blue bikini briefs and hiking boots, Underwearman, sweeping my superhero’s walking stick under the bed, when this six-inch monster with a fluffy, striped tail lunges out from behind the nightstand and bounds around the room.  I shriek.  He shrieks, and runs in my bathroom.  Cunningly, I slam the bathroom door, and sleep the rest of the night in peace.

At sunrise, I drove to Vegas to catch my flight, a bolder, more confident outdoorsman.  I’d learned new techniques in bladder control, new ways to shave without water, and I dared board my plane without having showered.

Two of his short stories have recently been published online. The Obligate Carnivore has been published by the Scarlet Leaf Review @ Category: MICHAEL JUST – SCARLET LEAF REVIEW