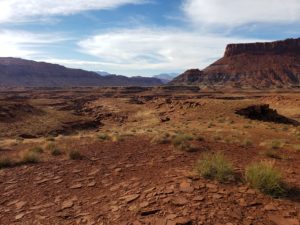 I was hiking in a canyon off the beaten path just after dawn when I decided to reach a ridge and see if I could spy Monument Valley from it. I waded and zigzagged through the sage and Mormon tea, finally using a box-shaped juniper as my guidepost. Out here in southeast Utah, false ridges can roll like waves and you never get to that vista point you might imagine is there just over the next rise. I’d been contemplating whether we get to heaven, whether there is even a paradise. Me, always gearing myself toward the next life, the next thing, missing the pots of gold right there along the way.

After the first false summit gave me a view of more red, sandy hills, the next one a couple hundreds meters beyond bestowed a vista of Monument Valley in the distance, far across plateau and desert. It was a distant vision in the amber of the new day, the megaliths a blue-gray hue, simple twigs poking up from the horizon beside a long, blocky mesa. I counted 4 or 5 sticks in the sand, which would be massive edifices of sandstone if I stood beside them. Yet still, in that ethereal light, waxy in the haze from the holocausts in Cali, there was a heavenly quality to my vision.

My arrival at my destination seemed an answer to my contemplations these last few weeks. You do arrive at your destination sometimes, and it can be everything you thought it might be. We can arrive in the heart of paradise.

We get to heaven because we’ve never left it. It’s here and now. I don’t need to wait for it in the future, or rummage around for it in my past. I can’t merit it through suffering or sacrifice, or earn it through hard work. It’s a gift freely given. It’s the vision at the top of the hill. It’s always available to all of us, though I may reject it.

It’s not about ‘deserve’ or ‘worthy.’ And as I drove home from Red Canyon later that day, I thought that perhaps, because I couldn’t feel it in most moments, that I needed to snatch it from God, to steal it like Prometheus stole fire from the gods and gave it to humanity. But if it were a zealously guarded treasure that God kept from us all for Itself, then it wouldn’t be worth stealing. Paradise wouldn’t be a worthy or ultimate destination.

All I need do is open myself to it, which is to open my heart and mind to what is right here, right now. It’s to make myself available to it. It’s to aware myself of my natural state.

But most moments, I don’t experience it. Don’t feel it. And I made up my mind as I drove through the majestic gateway of Comb Ridge that I wouldn’t write about it until I experienced it, and felt it in each and every moment. There I was again, putting conditions on it. Love gives itself freely to me without conditions. And since paradise presents itself without conditions, I can only receive it without conditions. That unconditioned, unconditional receiving is its only condition, which is no condition at all.

The condition I placed on joy was that I wouldn’t write about it until I felt it, until I experienced that pure bliss of which the Hindu mystics wrote. Otherwise, how did I know that the conclusions I came to about paradise were true: that it was a state and not a place, that it was here and not there, that is was now and not then.  I knew these things to be true, I thought that paradise was my natural state, but I didn’t feel the joy that came with knowing that. Maybe the old mystics didn’t feel those things either. Maybe they just concluded that you needed to open yourself to it in the present and then it would flood in. But maybe the mystics didn’t experience this bliss either, but only arrived at it as an idea, as an intellectual construct. And so if I didn’t experience it right now, maybe it wasn’t a real thing. Why would I write about it if it wasn’t real?

But then an odd series of things happened. I came home and a bunch of friends either called or texted. I felt some measure of peace. I felt like a really belonged in the universe, a feeling I hadn’t had for months. I slept like a child.

The bliss of the mystics was simply the joy of the present moment. It wasn’t an exclusive joy that only they had access to. We could all claim it, if we chose it. Being human meant I wouldn’t necessarily feel pure joy every moment of each day. Instead, it might be a gradual thing, and come packages in different experiences. In my case right now, it was a feeling of love and belonging experienced when others reached out to me. Paradise is simply being present to love’s presence.

Yet I’d erected certain obstacles to obstruct my view of paradise. I’d raised certain objections to love’s presence in my life. And they were all the things I noticed earlier:

They were time, and living in time, searching, longing for paradise as a hopeful expectation of the future. Always then and never now. I’d have to wait for it. Or I once had it in the past and if I could just go back and recreate that magic moment. Or rewrite some bad episode from the past so that it turned out better, leading to a better present. But that never did it either, because the past was gone, beyond my ability to edit out some traumatic segment on the tape of my life.  In either case, the past had slipped away while I was busy focusing on the future.

The barrier was earn, deserve, work for, suffer for, sacrifice to get it.  A form of purchase. I needed to toil to merit heaven, when always it was a gift I couldn’t make myself worthy to receive. Not because I was unworthy, but because I’d never fallen from worthiness. I only thought I had. So there was no way to earn what I already had in the bank. There was no way to deserve what had already been given and could never be taken away. Anything worthwhile in life is free, available to all, and irrevocable.

The greatest mistake I ever made was to think that I could throw away paradise and replace it with something called hell. But who am I to do that? Who am I to think that I could possibly deny paradise? That would make me God, and God I am not. Maybe that’s the conceit, that I believe I’m as powerful as God, so I think I can actually throw away paradise. It wouldn’t be much of a real thing if it could be lost that easy. Who am I to think I could do all that? I’ve only fooled myself into believing that is possible, because I chose power over joy.

The obstacle to being present to love’s presence was thinking that I could snatch heaven away from a God jealous of its embrace by anyone other than Itself. But would such a God be worth having? Would you really want to live in  paradise with gates guarded by jealousy? Such a heaven would be more like living in a walled fortress. It would be made by a selfish thing, by a god and not God. And such a god I have created. Yet I will not be mistaken in the belief that just because I’ve created gods, that that means God is dead, that there isn’t any real love behind it all.

The obstacle was thinking itself. For with my first thought I negated reality. It’s in meditation, which is the awareness of bliss, that I practice the presence of paradise, and aware myself that it has never left me.

And mostly, the obstacle was in the creation of conditions to my experience of happiness, which are simply barriers of protest I throw up against love’s presence. When they are of the future, I call them expectations. When they’re of time, they’re insurmountable because it’s never then. It’s always only now. I can tell when I’ve created a condition by my language: I’ll be happy if… I’ll be happy when… I’ll be happy then…

← Just for You
The Heart’s Intention →