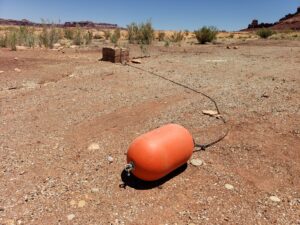 I’d been living the drought for years, dodging forest fires, watching trees die, seeing ponds dry up. 2021 wasn’t only the year of Corona, it was the year of the megadrought. 75% of the West is in severe or exceptional drought, and my little piece of the Four Corners was no exception to the exceptional.

Some of my favorite hiking is on the western edge of Cedar Mesa, near Lake Powell. I’d been reading about the lower levels of Lake Mead, North America’s largest reservoir, for years. This year, it was at record lows. I decided to drive down to Lake Powell, North America’s second largest reservoir, separated from Mead by the length of the Grand Canyon, to see just how low it could go.

The picture at the top of this post oughtta be worth a thousand word count. Hite Marina, at the northern end of Powell, is permanently closed. The picture below is a halfway decent before: 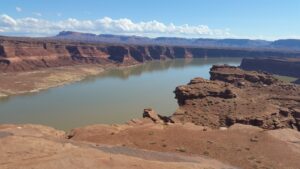 But today, on June 12th, I parked at the end of the old boat launch and crashed around in some weeds until I finally reached a river. In the shot below, I’m walking across the lake you see above:

The lake does exist, farther downriver at White and Farley Canyons, the lonely lady at the Hite store told me. We struck up a conversation, sharing a common history in Chicago, naming our favorite bars and swapping some old war stories. To compare Lincoln Park to the view outside the window of the Hite store was as apples and oranges as the before and after immediately above.

It’s the worst drought since Anglos started keeping records. Ranchers were auctioning off cattle now to save the herds from dying. Local farmers in the co-op I belong to had to refund my check because their water was running out in June this year. Last week, I’d headed down to the Dolores River Canyon downriver of McPhee Reservoir and saw only a trickle, and a fish trying to hang on in a hole along with a pair of mallards trying to raise their ducklings before the stream gave out.

A lot of our fruits and veggies come from CA and AZ, both downstate users of the Colorado, which btw, still does flow through its old channel at Glen Canyon, aka Lake Powell: 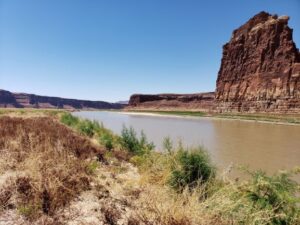 The river is reverting to what it was before the Bureau of Rec made the desert bloom with crops and spawn with cities. This may be the worst drought since the times when the Ancestral Puebloans also made the desert bloom. Today, vast conurbations depend on the river shown above. The cities vote themselves the water over the farmers and ranchers, which may have knock-on effects on all of us later in the year, in terms of what we’ll see in and how much we’ll pay in the produce aisles.

Though they’ve installed new turbines in the dams that can pump that sludge water for hydroelectric power, even those machines have their limits. Truth be told, The Bureau of Reclamation used 20th century rain and snowfall patterns in estimating how full the bathtubs at Mead and Powell would stay. The 20th century looks like it fooled us with precip totals above average compared to the surrounding centuries. The Ancestral Puebloans may not have had access to our technology, but they also didn’t need to support our great numbers.

The Ancestral Puebloans? They had to quit their cities and move into the hinterlands to survive. They built dwellings in cliffs that looked much like these scarps above what was once Lake Powell: 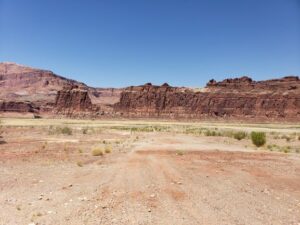 But when I look down at my feet, I see the faded dreams of another, sprawling civilization. The bigger they are…. 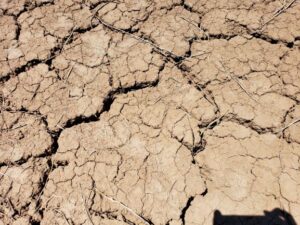 [This was written in June, 2021. A year later, the store and gas station closed, and everything was drier than the year before. Stay tuned].