You step to the rim up here, and you begin to see what all the fuss is about. In the remote distance is Black Mesa, which some regarded in the old days as a bad medicine mesa. It’s why I chose to place part of my novel, The Crippy, there. The Crippy is in equal parts fantasy, mystery, science fiction, suspense.

The scene at the top of this post holds much of the Navajoland that tourists see if they travel down Highway 160, or perhaps up 163 if they’re heading north from Kayenta toward Monument Valley. In the foreground you can see the Canyon of the San Juan River as it meanders just west of the Goosenecks, those incised meanders which cut down a thousand feet, and take five miles to travel three.

The structures in the midground are the formations of Monument Valley. Return to Black Mesa, the overstructure in the deep background, which makes up the horizon. In The Crippy, the two main characters, Mitch Cantsee and an 8-year-old girl he’s charged with protecting from governments, from Men in Black and from strange, other worldly beings which the child, Samsara, calls ‘oglethings,’ take refuge on Black Mesa. There, they encounter some weird happenings, along with an unexpected protector. Fugitives end up in bewitched places because they think no one else will follow them there. 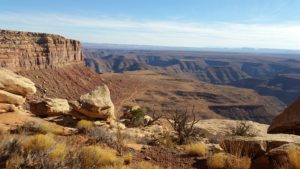 Strain your eyes to see the mountains

If you look farther to the south in the panoramic above, you’ll see what I call the Navajo ranges — gently sloping mountains as well as dramatic igneous escarpments which together make up much of the watershed for the Navajo Nation. The mountains are the Carrizo, a lacolithic range which represents the eroded remnants of an underground magma chamber. Higher and farther to the south are the Chuska, which straddle the AZ-NM border. The Chuskas are important water sources for the Dine’, the Navajo. Geologically, they represent a dissected plateau rather than true mountains. But if you ask a Navajo, the geology is only part of a story that includes history and myth. Between these two ranges, the Lukachukai Mountains form a satellite range.

Pull focus like a camera to the foreground. Just over the lip of the cliffs on which I wander, the majestic, ship-like silhouettes of Valley of the Gods, dipping below the hair-raising, hairpin turns of Moki Dugway constructed by U miners to get down the cliffs, stand erect like a miniature Monument Valley. 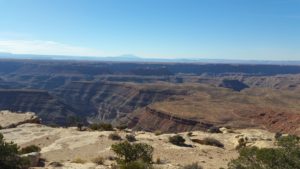 The Symmetry of Navajo Mountain

Pan far to the southwest of all this. The symmetrical hump on the horizon of the image above is Navajo Mountain, an iconic shape that rests on the AZ-UT border, just south of the mouth of the San Juan River at its confluence with Lake Powell. Most of the lands you see are Dine’tah, Navajo lands. Due to the sluggish pull of Lake Powell, engineered by Floyd Dominy and the Bureau of Reclamation in the postwar years, the San Juan barely budges in its last few miles past places like Clay Hills Crossing. It turns to sludge.

Much of The Crippy takes place here, in what you see throughout these images. The main character, Mitch, grew up in a small gateway town just off the reservation. It strikes me that if you transpose the ‘e’ and the ‘a’ in gateway, you get getaway, and that’s exactly what Sam and Mitch try to do: get away from the law, from drug traffickers, from extraterrestrial witches. Or is it all just the delusion of two lost souls; one a little girl orphaned by the world and desperate for attention, the other her would-be father spun out from drugs?

Mitch is half-Navajo, half-lost in the white-walled world to which he only half-belongs. Adrift in Navajoland, he’s been lost far longer than the time it’s taken for the law to swear out fugitive warrants for his arrest for kidnapping. What a place to take refuge for an exile; Black Mesa, the past site of old coal mines played out, the site of present controversy about whether there should be a new power plant which would bring jobs to Navajoland, and which would need fossil sources for that plant, maybe right here.

Yet the conflict isn’t limited to the Navajo and Black Mesa. Thee picture above was taken from the south rim of Cedar Mesa, a Delaware-sized plateau much like Black Mesa in its wandering, interfingered, in-and-out canyon rims presiding in promontories high over high desert. The controversy here is Bears Ears, declared a National Monument by Obama, taken away by Trump.

I’m standing near Muley Point. It’s a reasonably desolate overlook most days, but who knows what becomes of it if it develops? It’s why I chose to place The Crippy here. I wanted people to see these lands in words, in case something happened to them in deeds.

← Refuge in Mystery
The Dugway →