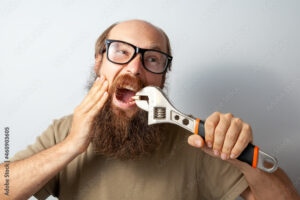 Once you find out that your ego’s the source and center of all your problems, you’re liable to just want to trash it. When I was a young dude, I never thought I had an ego. Then, when I found out I had one, of course I had the biggest ego ever made. I had to get rid of it, and I ended up with two problems instead of one. An old English clergyman, William Temple, once said that the problem is that we’re self-centered, and no effort of the self can remove the self from the center of its own endeavor. Put simply: You can’t get rid of self-will with self-will.

I can’t kill the ego without going insane. I need my ego. It gives me my sense of identity. I knew a guy who was schizophrenic. He said that part of the problem with his illness was that he lacked ego structure. I never lacked that. The problem is, my ego was always way too structured. It was getting blown up bigger than it needed to be. Then it would float around like the Hindenburg and bump up against all these other dirigibles and sharp pointy objects and get itself hurt. Sooner or later, it’d pop and hissssss and whizz around like a mad fly until it settled on the floor.

When I was in 7th grade and I discovered girls, my teacher, Mrs. Snelson said: Mr. Just, you’re getting too big for your britches!

What! Who, me? I protested. But I knew what she meant. Deep down, I must’ve known she was right. You can’t keep pumping that ego up, but you can’t kill it, either. All you can do is let the air out of it once in a while so it’s not bumping up against too many of those sharp pointy objects. Either you do it, or somebody or something else will do it for you. All you can do is deprive it of hot air, and choke off the obsessions that blow up that incorrigible dirigible. And even with that, your path may be a dubious one.

I remember wanting a particular obsession completely excised from my brain. That night, I had a dream where there was this mad dentist with a wild shock of hair, and he reached into my mouth to yank out a bad tooth with a pair of giant cartoon pliers. He didn’t know which tooth to pull.

I stopped him and said: Wait a second. How do you know which one’s the right one?

It doesn’t matter, he replied. I’ll just keep pulling until I get the right one.

Then he pulled out a molar at random. All the teeth around it started to crack until I spit the enamel out of my mouth like powdered porcelain. I was toothless.

So the ego’s obsessions, my appetites, may be connected to some very important things that I need. Stubbornness may be determination disguised. Lust may be connected up to creativity. It’s all about balance, about an invisible red line I cross when something like my work ethic becomes workaholism. To decide what gets pulled and when is beyond my paygrade. When the ego seeks to use the power of the ego against itself, I get civil war inside my head. The obsession that I can remove all my other obsessions, even when I don’t know what may be on the other side of the coin, is perfectionism. It’s just more ego when I think I have the power or the wisdom to make myself perfect. The truth is, I need my ego, even though it’s always trying to make me think I’m bigger than I really am. Once all my teeth are gone, how am I gonna chew? What will I have left to smile with?

Trying to be perfect is the delusion I’m God. It’s just another ego trip. The wisdom, the timing and the power to get rid of my ego’s obsessions has to come from another source, deeper than the veil of the ego that generates them. I found out that I can’t be my own dentist.

← A Meditation on Light
The Race between Bears and Bank Accounts →