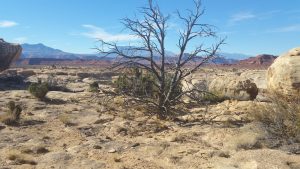 It was so hot…

You’ll drive down to Hall’s Crossing on July 4th, and find the lakeside campsite deserted because you’re truck thermometer reads 102 degrees F, which stands for ‘F, is it hot!’

Why do you do this?  Because in two weeks, you’ve booked a backpacking adventure to the Grand Canyon, and all your friends are asking:  “F, why are you going to Grand Canyon in the middle of July, man?”  And you begin to doubt yourself.

After all, you are 52 years old, and you realize you’ll have to truck in 16 extra pounds of water to cache on Powell Plateau.  And so you begin to do so some modest desert training.  After fleeing from Hall’s Crossing because of the speedboats and RV’s and marinas, none of which you own or know how to operate or are remotely interested in physically, you take a leisurely drive down BLM Road 96 for about half-a-mile, until fine red, drifting sand the consistency of foot powder stops you out.  Then, you’ll begin to use the rearview mirrors of your pickup to navigate out in reverse since you can’t turn around (no room, too much anti-fungal sand).

Then you’ll almost get stuck a couple times, with your front tire turned sideways and mired in sand a quarter way up the wheel as you gun the engine in panic and spin in place, digging the hole deeper, and it ironically reminds you of Chicago winters getting stuck in the snow, except your snow now is blood red and fine as Desenex and it’s 102 degrees F.  But you say a prayer, hop out of your vehicle, eye your route, jump back in, back up a few feet, jump out, survey the next few feet, and all the while the two hemispheres of your cortex are conversing aloud, like Larry and Curly.  You note that Moe, the leader and the only Stooge with half a brain, is absent from the conversation.  You’re cooked.

Somehow, through prayer and enough residual non-panic, you back all the way out of the sand trap and end up parring the hole.  After that, you resolve only to camp on gravel, since thunderclouds swirl along the horizon and the sign down Hole-in-the-Head Road says ROAD IMPASSABLE WHEN WET, CURLY.

So I pull in about 10 miles east of Powell on BLM Road 96.  I strap on a couple liters of water in my camelback and an extra quart in a fanny pack.  I pad on two 2½ pound weights in the fanny pack and grab a 10 pound weight for each hand.  Why do I carry weights?  Because Curly said I should simulate all that water I’ll be muling in to Powell Plateau in a couple weeks.

Then, I start hiking up a road in the blinding sun, until I scramble and top out on a mesa, and enjoy sweeping vistas (good views) of the Glen Canyon region, entire.

I’ve never seen the Henry’s from almost due south.  The pediments of Mounts Ellsworth and Holmes, coined the Little Rockies, sweep down into canyons which wend into the aquamarine fingers of Lake Powell.

Mount Pennell sets back from Mount Hillers, and Bull Mountain many miles north at the foot of Mount Ellen peeks out from the staggered groups between Hillers and the Little Rockies.  Across a gulf of desert, the featureless azure of Boulder Mountain rests at the eastern edge of the Aquarius Plateau.  The Water Pocket Fold burns bright white like a dinosaur’s bleached bones.  South of all this, with the last of the San Juan River between them, Navajo Mountain gathers storm clouds at its summit.  Storms gather.  Storms come.

I make it about a mile-and-a-half down another road to another mesa top, deposit my weights beside a bush so they won’t heat up to 212 Friggin’ degrees like they did when I left them out in the sun on the last mesa.  I search out the only other shady spot within a square mile, then sidle up against a juniper brimming with berries, and somehow remember that they make gin out of juniper berries, which is weird to remember because I never drank gin.

I languish luxuriantly in the pine litter beneath the juniper as half-a-dozen species of tiny vermin crawl up my arms and down my pants.  After 20 minutes with my hat over my face and flies whining in the heat, I survey the changing sky.  Storms from near Navajo Mountain edge closer, and Larry suggests that I head back to my truck.  Ten pound metal disk weights in each hand and a couple more in my fanny pack might not be the best way to dodge lightning bolts, Larry says.

After a snack, the ritual de-sanding of the spaces between my toes with socks turned inside out, and a quick read of the Glen Canyon NRA slick-and-glossy foldout which I received from the friendly lady at the entrance station to Hall’s Crossing, I slide on new socks, some shorts, a fresh shirt.  I embark on a sunset hike.  I leave the weights in the camper.

The second hike of the day, after the grueling work of desert training is done, is often the funner.  I walk the deserted highway, scramble up a wash into a shady box canyon replete with a giant juniper and some cliffrose, and scale up some vast, rounded sandstone monoliths.

I traverse the slipface of a barchinoid dune long since turned to stone.  An ossified erg weathers back to sand.  I imagine that a wandering medusa cast its eyes on these deserts millions of years ago, and froze them all in time.  Whipsawed sand faces crossbedded in scissor cuts and in Y-formations betray the runes of an eolian past.  I summit one of the sandstone domes, and realize how easy desert scrambles usually are.  All you need do is zigzag through the ephedra and sage and find an overhang.  Then sit and watch the storms roll, and try to gauge which way the winds blow, which way the squall spins.

Distant thunderheads parade north along the horizon formed by the Aquarius Plateau.  Perched on my own private cathedra a few hundred feet over Highway 276, I become still and watch.  In the Monday through Friday race, I hoist all the cares of the planet on my back like 25 extra pounds of barbell weight in the 102 degree heat.   In that world of comparison and responsibility and shoulds and hafta’s, I forget the fundamental, elemental, pedimental truths:  that I am in reality free of all the thoughts which seem to chain me down, but which are just cobwebs of my imagination; that I make it all up as I drift along;  that worry remains the only waste I can make of the time I have; that grief is based on the dream that my separate skin is a wall harder and more everlasting than the cliffs which span the distance before me from north to south; that all dreams end in waking.  I need to sit on the edge of a mesa and take in the late afternoon, blued storms braised by sun, to let the sand settle and remember all that.

The storms took away the harsh light, and replaced it with wind that cooled my cheek and my legs.  That night, I camped just off the highway. Only the occasional pickup thundered past, towing a sleek boat to or from Powell.

After twilight, I walked down Highway 276 to a gravel road I’d reconnoitered from the top of the sandstone bluffs that afternoon.  As I traversed the darkness, I estimated that the person in closest proximity to me slept miles away.  I shed my shirt and let the winds cool my chest.

I wandered up the gravel road until it ended in a vast circle higher up on a flat.  Chunks of asphalt littered the gravel, the ruins bequeathing of an ancient civilization.  The circular clearing seemed perfect for an alien landing.  I wandered over to a high signpost at its edge:  PROPERTY OF UTAH DEP’T OF HIGHWAYS.  NO TRESSPASSING.  The UDOT sign was holed through with birdshot.  I disinter another sign on a gravel heap: Utah Republican Party Caucus, March 15th.

I trek back to the highway, pulling the mystery of these dark, de-peopled lands in through my pores, half-wanting, half-expecting a visitation, half-alien, half-biblical.

Nothing comes but the wind.  I’ll take it.

[To get to Hall’s Crossing and the many pullouts, vistas and at-large camping available on BLM land outside the Glen Canyon NRA, just hop on Highway 95.  Take the left (south) turnoff to Highway 276 and proceed to Hall’s Crossing.  It’s 45 miles to the water, but the desert is the feature here].

Two of his short stories have recently been published online. The Obligate Carnivore has been published by the Scarlet Leaf Review @ Category: MICHAEL JUST – SCARLET LEAF REVIEW

← I’m Sorry, There’s No Record of Your Birth or Death
Water Falls Yet Does Not Die →