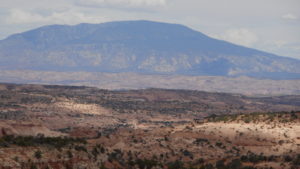 I’d only been closer to the supremely isolated Navajo Mountain once, years back when I’d driven toward it along a Native road and then got out and hiked to its base on Navajoland. A Dine’ couple had stopped in their car and asked me if I was lost and whether I needed help. I, the bereft, helpless Anglo a million miles from home.

A brooding, lone mountain – a monadnock or an inselberg, it’s called – Navajo Mountain, the Mountain of the West to the Dine’, figures prominently in the settlement narratives of the western part of Dinetah, or Navajoland. The Dine’ know it as Naatsis’a’a’n, as Earth Head or Pollen Mountain.  It also forms an important part in the sacred histories of the Hopi, whose holy men sometimes make pilgrimages to sites on the mountain. The mountain also has significance to Paiute tribes which once lived nearby.  Wholly on Navajo land, the mountain rises to 10,388 feet, the highest point in the Nation. Despite this, it bore only thin veins of bright new snow, compared to the snowed-in Henrys, the Abajo and the La Sals father east.

Across the Colorado, at Hole-in-the-Rock in Utah, I hiked over slickrock sandstone domes, crossbedded with thin striations that some primal wind had whipsawed in one direction, then another, never making up its mind. Wildflowers bloomed in ancient blowouts where soil had accumulated over centuries, stabilized by cryptobiotic soil that was coaly black, as if lightning had left its scorch.

I kept careful watch of landmarks as I scrambled through this untrailed land of ossified erg, looking back from time to time to remember where I’d entered off the road. After about an hour, I was stopped out by a winding slot canyon that dropped a hundred feet or more down to a sandy bottom. Llewellyn Gulch.  Dark storms hung over the lip of Fifty Mile Mountain, which presided in the northwest.  Never chance a slot canyon when there’s clouds that might send rain, even if it’s dusty and dry where you’re standing. Besides, there was no easy way down.

I marveled at a sharp, sugarloaf boulder 30 feet high, towering in the center of the gulch. I followed the southern edge of the slot as it wandered toward its unseen rendezvous with Lake Powell.  After about 45 minutes of a boy’s explorations, I headed back.  Snapped some pictures first. Had to impress Clint, right? Then I remembered Resolution # 1.

On the return trip, I decided to trace the footprints I’d made on my way out through the sand. I never navigated with maps or compasses or GPS. Not that I was above all that. I just didn’t have a lot of technical smarts. When I was out here, something else took over; a simplicity, an ingenuity that wasn’t me, didn’t seem me when I was back in the gadgeted world. So I used sky and landmarks and the legend of my own bootprints.   I did alright for a while, but knew it’d be a challenge finding my footsteps all the way back because of the large tracts of slickrock I’d crossed to get here. As happens so often in my desert wandering, I’d find the trail I’d left by my past self, then lose it, only to find it again.

Eventually, I’d lost my footprints for good. But I had Fifty Mile Mountain to the west and some chess-like mushroom domes to the east to guide me. I had Navajo Mountain behind me. A misplaced aspen to the right, an eagle shaped rock to the left. Soon, I was back at the campsite, delving into Backpacking with the Saints, a tome on desert spirituality by Belden Lane.

Next morning, I walked the road back north toward Escalante. I tested it to see if I still had a way out with the rains that came and went over Fifty Mile all night. I slipped in the clay more than once, my shoe deepening in the mud.  Iffy shit. Most likely, if you can’t walk a road, you can’t drive on it either.

I dressed for winter. Sideways rain machine-gunned my eyes as I made it the 4 ½ miles to Hole-in-the-Rock, at the cliffs over the Colorado. I had to wear sunglasses against the ice spit. The only other animals out in this storm besides me were a herd of cattle. The Missouri and Texas dudes I’d run into yesterday were nowhere. They must’ve gotten out while I’d been hiking yesterday. Now I was the only human. Who knew how far I was from the next biped?

As I read about the people in the San Juan Expedition, tears welled up. They’d hoisted wagons and cattle and horses and babies over the cliffs. Their horses, blinded by pink eye, crashed down the escarpment without knowing where they were going. You could still see the scrapes of the wheel hubs in the rock. Blood and hair from horses and children and men and women that had stained the stones had long ago been washed away by rain. The muscles of horses and men had seized up.  Children sliced their legs open on the rock. They were willing to do anything for their beliefs.

I climbed a frozen erg of sandstone, wandering into holes and blowouts, oases protected by the primeval, stone dunes that sheltered in their fissures agave and sage, paintbrush in bloom, the waving and delicate wheat-like tassels of red threeawn, sometimes a juniper.

At the end of land, where the wide expanse of Glen Canyon began, the Hole dove straight down between the gapped shoulders of mushroom rock. I followed the slickrock sea to its end. At the cliff’s ledge, Lake Powell opened up over a thousand feet below. I tried to envision what it had been like as a dry canyon, but it was hard to envision that, with the banded, white, yet charry bathtub ring where the water had been at its high mark, back when the lake was at full pool in the 80’s.

All of it, though was washed away by the vision of Navajo Mountain, which poured straight down into the lake where the San Juan River’s confluence with the Colorado is drowned in Powell.

The mountain is an ancient laccolith, an underground magma chamber that never broke through to the earth’s surface. Millions of years ago, these subterranean volcanoes, for lack of a better term, bulged and formed dike-like fingers which punctured through the underground strata of softer sedimentary layers such as sandstone.  The land above the magma bowed into dome-like mountains. The magma hardened underneath.

Over millions of years, the softer sedimentary caps of the laccoliths wore away, betraying the gray, igneous cores of the mountains. These were the Four Corners ranges – Navajo, the Abajos, the La Sals, the Carrizos, the Sleeping Ute Mountains, and the Henrys, all isolated ranges, sky islands that were home to bear and bison, elk and bighorn, presiding over the red rock  – while the desert, the remains of dune fields and beaches and primordial ocean floors, swirled below their isolated peaks.

Yet Navajo Mountain was unique among the laccolithic ranges in the Four Corners. It stood as a lone mountain, a turtle’s shell of near perfect symmetry from all vantage points. For reasons still puzzling to geologists, it has not shed its sedimentary cap as the other Four Corners ranges have. Like a soapstone carving of a tortoise sculpted by a Navajo artist, this mountain, plated with dikes and sills, with rock fins and parapets of orange and gray, ivory and dark steel, looms totally alone.

The north face is a busy aspect, a seeming city, like Honolulu on the shoulder of  Ko’olau. Square, adobe-hued structures hundreds of feet tall crowd next to platforms holding in shaded green forests.  Sculpted graystone triangles hundreds of feet tall embed themselves on the plunging mountainsides. Forests bordered the igneous triangles. Granitic walls of fins and needles, of spires and buttes, surrounded the subalpine forests in layered stacks up and down the sides of the triangles.  The vast gray blocks that make up the interior triangles bore the vague Marion shapes of shrines. The needles and spires were arrayed in processionals around the central shapes, forming triangular tenemos. I wonder whether the Hopi priests made their journeys there.

The mountain isn’t a simple dome, either. Ridges, splayed like fingers, radiate out from its summit.  Steep and rocky, forests are spare in their covering.  Satellite mounds and mesas – Dougi Butte, Nasja Mesa and Navajo Begay – guard the sedimentary pediments that spread in a gentle gradient along the landward side of the mountain, away from the river.

Yet along the river canyon on Navajo’s north flank, the mountainside seems to plummet via sandstone cliffs straight into the San Juan River. That is an illusion. In truth, red and ivory sandstone hills spill down in gradual steps to the water. And the busy geological puzzle seems simpler when you look at the mountain from an airplane, where granite dikes step down like battlements from the mountain’s flanks. But I wasn’t in a plane, was I? I was here, beholding this mountain all alone.

← Hole-in-the-Rock
Getting Away from YOU →