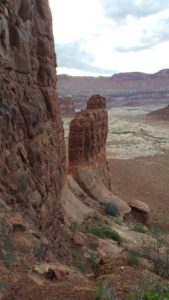 At day’s end, I hike back toward camp, down the red clay of Hole-in-the-Rock Road. Another storm rolls off the Straight Cliffs which loom in the west, taking up half the sky. Lightning strikes to the south along the flat expanse of rangeland dotted with sage. I climb down to a low spot and watch ants haul grains of sand out of their nest, making a mound. All day, all night, sunlight or storm, they never stop. Black veils drip with mammatus clouds overhead. A barrel of thunder. Once the darkest clouds pass overhead, I get back on the road and hike toward camp.

On one side of the road, the whitening summit of Navajo Mountain. On the other side, Fifty Mile Mountain steps up in four tiers. The first stair, the Straight Cliffs, parallel Fifty Mile Mountain for the whole 57 miles of Hole-in-the-Rock Road. An unbroken wall when viewed from the east, Fifty Mile Mountain is known as the Kaiparowits Plateau when seen from the west. It makes up the central portion of the Grand Staircase-Escalante National Monument, nearly 3,000 square miles in extent.

Fingers of white fog step over the cliff tops in claws. Above them, gleaming thunderclouds, like white light, let in shafts of sun which rain in tears of light instead of the sharp sleet that stabs my cheek. Windows of light, like the clerestory of a cathedral, admits fallstreaks.

And I have this feeling that I am loved amidst all the starkness and storm, between the cold drops of rain driving like pebbles by gales, beneath the ferocity and darkness, a gentle yet brilliant light pours out an unconditionality.

And I ask It what I could do, what I was supposed to do with my life, how was I needed to serve, by doing what, with whom, where, in what way. My whole life, I’d been asking that question, as if the answer would rain down on me in wings of light and rest itself there on my shoulders, bestowed like knighthood through the sword’s blade. When all the while, the answer was given, yet only in the moment that passed before my eyes just now, and never any further.  Never extended and guaranteed into some future state in which I knew the mission of my life forever until my dying day.

The sun high but settling in its plane to lower itself behind the immense plateau. The raw beauty, the distinction between esthetic beauty, between physical beauty and spiritual beauty, smeared and erased right then, like the clouds streaked across the sky at the rim of Fifty Mile. The world was in my mind, always. There is beauty in all things – terrifying, ugly, welcoming, rapturous beauty. It is the light in which every made thing is brushed and seen, and yet which shines from within all things. Yet who made the thing seen? God, or my eye?

Off my other shoulder, near the base of Navajo Mountain, the sun angled below the clefts of cloud, and its lowering light somehow dodged the intervening buttes and mesas of Glen Canyon, roving between the southeastern end of Kaiparowits Plateau, Dougi Butte and Nasja Mesa, where it set Cha Butte on fire. It made it through the graveyard of gigantic formations and burnished only the red and ivory sandstone, while the summit of the mountain remained in shadow. I couldn’t escape the beauty. The miracle of now is that it always was and ever would be. All else besides this is just conjecture. How, out of this feared, fearing world of pain and death, what truly enfolds is a momentary infinity, and that this eternity, discovered only in the moment, is somehow, for some inexplicable and marvelous reason which defies all odds and all the laws of probability, benign. And accepting of me even more in my smallness and blindness and ignorance than in my triumph. For the feeling that I am loved intrudes like water into the sinking vessel that I am, and in my drowning, floats me.

My life’s work is just to acknowledge this, and then, to accept it.

Fifty Mile Mountain and the Straight Cliffs stepped below continue in the foreshortened perspective drawn by the escarpment for dozens of miles north, wandering out, stepping back, until they winnow down to a faint blue line just over the horizon of land. Like sea cliffs, like a front of storms, becoming smaller, shorter, terracing in, stepping in, until they just dissolve into the world.

← Getting Away from YOU
Riding the Sturm Out →