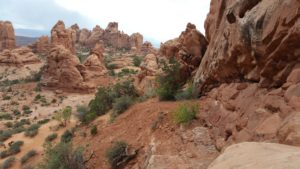 Moab’s changed, but the redrock’s still the same. Came up here for a group camp at Ken’s Lake, just south of town. Ended up rock crawling at Hell’s Revenge until 2 in the morning with a gibbous moon torching the slickrock seas that roll out in great, petrified dunes stretching to the horizon. Downtempo hip hop blasted in the rear speakers. Electric blue light ignited the fossilized ergs.

Next day, I woke to the La Sals still with snow on their north faces, poking over the medium rare cliffs. A few of us went up to Arches, just outside town. Despite all the traffic and runaway hotel plague (there was an auto show in town), despite the midmorning traffic backup into the Park (we waited over an hour), Arches is worth it. Take a look at some of the shots here. 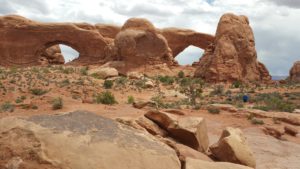 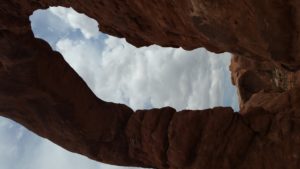 There are 2,000 arches in the NP. Panoramas of the surrounding terrain remain without peer, and Canyonlands lies just across the road. 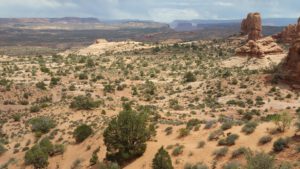 The arches, the fins and parades of red stone elephants seem like how a landing on an exoplanet might unfold. My novels, The Crippy and The Mind Altar, are set in these desert scapes, far from oceans, injecting you into inner realms of mind and psychonautic fantasy, phantasm alternating with delusion, cybernetic ghoul with simulated angel. 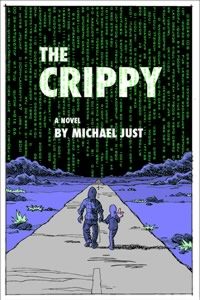 I choose backdrops like this because these exotic landscapes add an element of the bizarre to already vulnerable characters. The people in both The Crippy and The Mind Altar are out of place in these fantastic topographies. In The Hero with a Thousand Faces, Joseph Campbell writes about the 12 stage voyage the hero takes from her ordinary world through a special world and back. Soon after crossing the first threshold into the special world, the hero undergoes tests, meets up with allies, and encounters enemies.

In The Crippy, Mitch Cantsee, a drug dealer from a small town on the periphery of this great American outback, hides out from the law, from outlaws, and from ET’s in these high deserts along the UT-AZ border. He must protect Sam, an 8-year-old girl, whom everyone is after because of her ability to break just about any code. The Colorado Plateau region you see in these pictures provides a perfect cover, and the ultimate battlefield. It provides a proving ground in which both Sam and Mitch must test themselves against witch-like, shapeshifting adversaries. In the process they discover inner resources they never knew they had.

In The Mind Altar, Eurydice Wiles must lead an expedition of seven individuals deep into a desert canyon. The collection of outcasts must move into a vast underground prison in search of the answer to a mystery: how psychopathic inmates gained control and tortured each other to death. 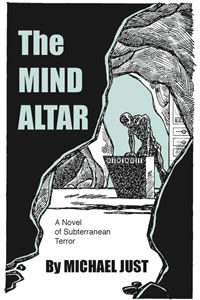 If you enjoy wild fiction that takes place in wild lands, both books are available on amazon or through this website. To purchase The Crippy in e-reader or softcover, just click https://www.amazon.com/Crippy-Michael-Just/dp/1533034699/ref=sr_1_1?ie=UTF8&qid=1518209793&sr=8-1&keywords=the+crippy

To get there: Ken’s Lake is east off Highway 191 about 8 miles south of Moab proper. Just follow the signs. Plenty of campsites, but you may need to reserve a space months ahead of time during peak season (April thru June and again in the fall). Speaking of fall, you’ll practically fall into Arches NP if you head just north of Moab. The Park entrance is east of 191, north of the Colorado. To avoid the congestion, go off season, or maybe just go late in the afternoon or early A.M.

← ‘Drought Beyond Extreme’
The Dirt, a new novel →