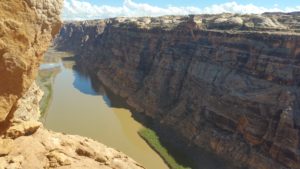 I’d like you to consider something: that we are conduits, and not end states.

For the most part, humans and other animals (to the extent that animals are self-conscious) consider themselves as end states. For each individual, its own survival is paramount. Even if we think of others, we do so secondarily, as means to the end of our own survival or happiness. To the lion, the gazelle is a meal.

Yet we are also conduits. In a way, human beings and other living bodies are vessels for the transportation of matter and energy around the planet. We act as transfer devices for moving mass and energy from one point to another within the biome. In the past, organisms acted as unconscious agents to achieve balance within an environment. If there were too many of a certain prey species, and it threatened to crash the biome within which that group operated, then predators helped rebalance the ecosystem by culling the prey that threatened to throw everything out of balance. Until our arrival as a species, this balance was more or less maintained. When great imbalances occurred, Gaia, the earth as an organism, found ways to wipe the slate clean through mechanisms like mass extinctions.

Organisms didn’t realize it, of course, but they acted as agents of balance, moving food and waste, mass and energy from one part of the earth to another. When people came along, there were two developments. First, we realized that we were conduits, at least some of us did. Second, we destroyed the balance. And we destroyed the balance because most of us continued to see ourselves the way other organisms did: as ends, whose survival and pleasure justified any means deployed to survive, and thrive.

Yet at their highest levels of awareness, humans do realize that we are each channels, and not the end in itself. Look at the Prayer of St. Francis. It begins like this: Lord, make me a channel of your peace. If you’d rather not think of God or prayer as having a role in all this, that’s fine. Then look at pure, random biology. Trees represent the whole, but they are obviously composed of parts, of roots and a trunk and limbs and branches and twigs and leaves. Each of these parts seems alive in its own right, and each part may be alive. But it cannot survive on its own. And it also acts on behalf of the greater whole. Each part of a tree transports water and nutrients and in a sense breathes and drinks for the whole. In our own bodies, cells are living things, yet they produce energy and remove waste and distribute these products and byproducts throughout the whole body, for the benefit of the whole. In fact, these cells don’t have an existence independent of the whole, and couldn’t survive without it.

This observation that parts serve as conduits for the whole isn’t confined to things we regard as alive. Rivers transport nutrients and waste, moving mass from one point on the globe to another. So do the currents in lakes and oceans. Even the plumbing of the earth – its tectonic plates and volcanoes – circulates planetary energy in the form of heat, recirculating rock waste deep into the planet’s interior, where the geology is metamorphized into something else before it’s recirculated back to the surface through the processes of eruption and erosion. So you see, everything is a conduit, a vessel, a means to an end. Even in the larger cosmos, this process of recycling and recirculation takes place, with stars cooking gasses into plasmas, then exploding in novae, which form great gas clouds and accrete into planetary bodies, where life has evolved on at least one such body as a means of efficient redistribution.

We humans are in a unique position for the same two reasons mentioned earlier. We realize this process. We observe it. And we forget it. And by forgetting that we are conduits, and seeing ourselves instead as end states for which the whole was designed, we wreck the whole.

That from which we evolved, the animals, must survive. And by focusing on their own survival, their forms and behaviors are perfected by the engine of evolution. Yet then evolution produced us. And the very self-interest which survival through natural selection requires has begun to defeat the process of evolution. We are destroying ourselves and the planet which gave rise to us.

Some believe that evolution is purposeful, though most evolutionary biologists might say that its mechanisms are entirely random. Regardless of your own beliefs, humans are in a unique position to understand both evolution’s processes and its ends. And that end, I maintain, is balance. Yet the same brains which allow us to understand that balance are also responsible for creating the imbalances which threaten the earth today.

A change is required. Instead of yoking our powers to the instinct to survive, we have the opportunity to ‘step out of evolution.’ We can see ourselves, not as ends which the system called earth is meant to serve. But rather as means, as conduits of balance meant, whether through intelligent agency or pure randomness, to keep the system called Gaia in balance and harmony.

The choice is ours.

Mike’s other titles, including The Crippy, The Mind Altar, and Canyon Calls, are available through Amazon at https://www.amazon.com/-/e/B002LFMXAW

← Your Life as Movie
The Inside-Outside →